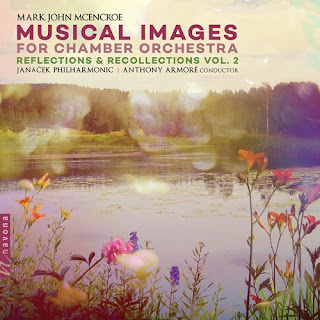 When covering the newest of the New Music along with the more "classic" staples of Modernity and sometimes neglected works from earlier Modern eras, it seems wise to me to keep an open mind. Every new album is a new universe of possibilities. Why pre-judge something when the deep listening will tell you what you need to know?

With that attitude I sometimes surprise myself with what I end up engaging with. Today's example seems apt. It is Australian composer Mark John Mcencroe and his album Musical Images for Chamber Orchestra, Reflections & Recollections, Vol. 2 (Navona NV6269). This is not the first review of his music on these pages. Type his name in the search box for another.

The album's music grew out of the first two volumes of Mcencroe's piano pieces. In his words they are "a reflective look over the passage of events, impressions, and feelings experienced throughout my life to date." Conductor and friend Anthony Armore heard them and suggested that they would sound well realized for a small chamber orchestra. Accordingly the composer asked his colleague and friend Mark J. Saliba to do this. The result is the present volume.

Each one of the 11 pieces that comprise this set is a kind of pastoral, ultra-diatonic expression, often enough through-composed, homespun, a super-lyrical presence. It is meant to please and set a scene such as does a lyrical movie soundtrack or for that matter a tone poem by Delius. New Age, Elevator Music, Sweet Music of the big band era, slow movements of classic works from the Baroque era onwards, programmatic lyricism perhaps since Beethoven's "Pastoral Symphony," naive folkish descriptive music such as you might hear in parts of Copland's "Appalachian Spring" or some Impressionistic, sonic nature-description from Ravel or Debussy? All this and a number of other things besides are something to do with this music though Mcencroe avoids a vapidity that might be associated with the more "popular" idiomatic characteristics of some of these diverse genre subsets at the same time as he does not sound imitative so much as charmingly untransformed, naive in his own way.

Nothing is deliberately banal, nor does anything appear to be ambitiously stepping forward as a stylistic statement. It is the continuously unwinding diatonic lyricism that marks this set of music off as both distinct from Satie's "Furniture Music" and yet spinning its own web of continuously present sameness of intent. Cage's Satie tribute piano set "Cheap Imitation" with its irony comes to mind in how it captures a style yet by being determinately generic (only more than that as well) drives down to some essence that transcends imitation.

So, then, is this a trend? Is this part of a new "school" of New Music? I do not think so. By setting out simply to do what this music does it strays from some processual path of musical evolution and instead offers a reflection of visceral consonential pleasure. And for that it pleases if you accept the terms by which it expresses itself. Or it can if you but leave itself to its own reflections as resounding in your ears.

This is music not of the future but rather music that has determination to pass us as it looks at its own past. It is no more nor less than itself. The orchestrations and performances are just so. First listen to a part of this and, well, if you like it that is what it is. If not, not.