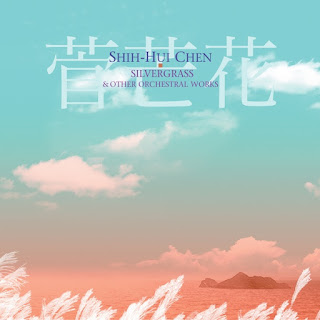 The liner notes to today's album rightly call this music "intercultural composition." And so it is. Chinese composer Shih-Hui Chen (b. 1962) comes out with five intricate, moving and fascinating examples rather deftly combining Chinese and Western Modern Classical elements on Silvergrass & Other Orchestral Works (New World Records 80807-2).

Ms. Chen has a remarkable creative talent in her ability to combine both style-sets and in the process give us a musical result most definitely greatly more than a mere totaling sum of the parts. There is a Chinese traditional concern with space and spaciousness and a special arsenal of timbrally bright instrumental techniques (mainly for the Chinese solo instruments when utilized in a quasi-concerted mode). And then there is a Western Modern concern with melodic-harmonic sophistication and motion-centered layering as we have come to progressively experience it in the past 100 years. And that in coexistence with at times some diatonic-pentatonic melodic elements as befits Chinese Classical tradition.

The four-movement title work "Silvergrass for Cello and Chamber Orchestra" (2016) forms the centerpiece of the program with its mysterious chamber orchestra panorama and concentrically expressive solo cello part. It is perhaps on first listen less overtly Chinese than the others but nonetheless has resonance in its timeless poetic outlook. And it is in fact a nod to Taiwanese Opera in its sonic foundations.

On the other end of the spectrum is the opening work "Fantasia on the Theme of Guanglingsan for Zheng and Chinese Orchestra" (2014), where the instrumental timbres are more or less wholly Chinese yet the unfolding has a linear logic not unfamiliar to Western New Music.

Kudos to Hsin-Fang Hsu on zheng, Mei-Hui Wei on Nanguan pipa, Wu Man on pipa, and Wen-Sinn Yang on cello. Compliments as well for fine contributions by the Little Giant Chinese Orchestra under Chih-Sheng Chen, Loop 38 under Jerry Hou, and the National Taiwan Symphony Orchestra under Yao-Yu Wu.

Each of the five works covers important ground. Space and time discourage a full discussion of each. Another highlight however is the innovative work "A Plea to Lady Chang'e for Nanguan Pipa and Chamber Orchestra." It begins by considering a well-known work in the southern Chinese Nanguan repertoire and in effect recomposes the entire piece--including vocals and the Nanguan pipa parts--into New Music terms.The undertaking is of course very ambitious but what matters is that the result breathes and expresses in lively fashion the double impetus for its creation. It all works, in short, in engaging and memorable ways.

You could say that about the entire program. Meticulously detailed and spirited performances and rather breathtaking compositional maneuvers make it all new and heartening. This is music of real merit, thoroughly path-breaking and intrinsically worthwhile as a serious foray to widen the intercultural boundaries of New Music today. Recommended, surely.


Posted by Grego Applegate Edwards at 8:08 AM