Will Liverman, Jonathan King, Whither Must I Wander 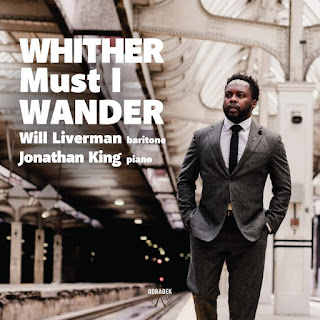 Baritone Will Liverman and pianist Jonathan King join together for a program of mostly 20th century songs about the varying dimensions of wanderlust, the urge to travel in search of transformation. Whither Must I Wander (Odradek ODRC389) bounds between points in a varied palette of musical narrative that each paint a poetic picture in words and tone.

The first thing one experiences on hearing this program is the sheer burnished beauty and heroism of Will Liverman's baritone. His voice is impeccably musical, nicely declamatory, dramatically present, powerful and rather sublimely booming forth no matter what the song. Pianist Jonathan King seconds Liverman with a pianism that is poetic and, yes, heroic in its own way as well.

The two together give us most distinctive readings of lively works, each track giving vent to a story-song that comes to terms with a varying personal mandate to wander.

With Ralph Vaughan Williams' "Songs of Travel" the narrator in nine interrelated songs grasps the freedom and independence of voyaging forth onto the open road and contrasts it with the contrasting allurements of love and home.

James Frederick Keel (1871-1954) follows with three songs on the lure of the seagoing life, "Three Salt-Water Ballads." Herbert Howells (1892-1983) on "King David" weaves a magic about a restlessness underpinning to wandering while showing some of his own original harmonic twists and turns. Aaron Copland's adaptation of the old folk hymn "Gather at the River" brings out the spiritual dimensions of going forth, while the compelling traditional seafaring folk song (arranged in 2000 by Steven Mark Kohn) "Ten Thousand Miles Away" sings obliquely of the longing to migrate home at last to one's life love.

For the final songs we get memorable treatment of Nikolai Medtner's 1905 "Wanderer's Night Song" and Robert Schumann's 1840 "Mendnacht," both with lyric invention and vivid content.

So ends a lively and moving program. It is none of it Modern in some advanced sense so much as it is highly engaging in the tandem of harmonic-melodic excellence and the singular theme effectively unwound by the very talented twosome. Liverman seems born to such lieder and with the brightly sensitive Jonathan King creates some definite magic. The Vaughan Williams has in its own way a definitive aura about it and the rest of the songs stand out with ringing musicality. Bravo!


Posted by Grego Applegate Edwards at 7:04 AM