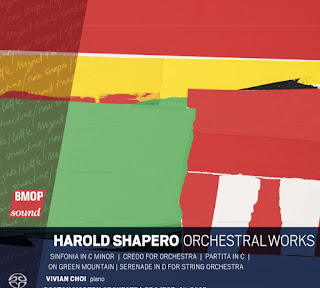 Our musical categories in the end are only a shorthand indicator of what a particular piece of music might sound like. So to say that Harold Shapero (1920-2013) was a Neo-Classical exponent it only indicates loosely that he had a formal affinity with the structural aspects of Mozart and Beethoven but that his Modernist slant to it was all his own. We hear that most productively on a new program, a mini-retrospective of his Orchestral Works (BMOP Sound 1072), as performed quite ably and effectively by the Boston Modern Orchestra Project under Gil Rose, with Vivian Choi handling the solo piano parts in a masterly fashion.

He developed a closeness to Leonard Bernstein while attending Harvard, and also studied with an impressive cast of greats--Piston, Hindemith, Copland and Stravinsky, He especially emphasized later in life how important to him was the influence and inspiration of the great Nadia Boulanger.

And so we get an excellent sampling of some five Shapero works in all. There is a very stately, majestic quality to the "Sinfonia in D Minor" (1948), the "Credo for Orchestra" (1959) and a similar framework as a launching pad for the multi-movement "Partita in C for Piano and Small Orchestra" (1960). The Partita covers a good deal of ground in ways distinctive and un-derivative. The musical syntax has a logic and elegance that carries the listening self over a great span of related possibilities and intrinsically fascinating terrain. In the process there are vivid orchestrational shades that blend well together and keep the ears focused and interested.

The Jazz-situated "On Green Mountain for Jazz Ensemble" (1957) is a breath of fresh air, a memorably upbeat paean that holds together well no matter how many listens.

The concluding "Serenade in D for String Orchestra" (1945) has lyrical strength and playful inventiveness with something of a folk-like expressiveness that gives us a heartening send-off. Shapero manages to create a serenade that convincingly updates a singing Mozartian earthiness while belonging thoroughly to the contemporary world he most definitely participated in.

In the end this is a valuable exploration of a composer we need to recognize and rehear. Rose and BMOP give us ideal readings of these five worthy pieces. I highly recommend this one for anyone interested in 20th century US Modern orchestral. It is a delight!
Posted by Grego Applegate Edwards at 8:05 AM