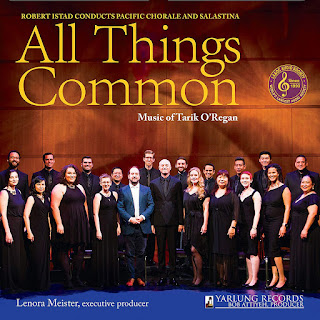 The choral music of Tarik O'Regan has something timeless about it, obliquely reaching back into sacred Western traditions as reference points yet making a joyfully contemporary noise of it all, not sounding like an Arvo Part so much as sharing an old-in-new synthetic view in its own way original and lyrical, Occident to quasi-Orient? West to East?

From the opening strains of the title work "All Things Common" (2017) we hear a rooted euphonious outreaching both highly lyrical and ultimately at key moments redolent with a spinning circularity and modality that marks it all as of our current time without sacrificing the linearity of sacred vocal tradition from the Gregorian period onward.

Seven works in all grace the program (Yarlung Records YAR02592), the centerpiece being the world premier recording of the specially commissioned "Facing West." All show how the Pacific Chorale and (as needed) the string quintet Salastina under conductor Robert Istad seem temperamentally suited in a near ideal way to the subtle lyric expression of the music.

The old-in-new aspect of O'Regan is especially prominent in the mass-chant evolution of "Magnificat & Nunc Dimitis: Variations for Choir" of 2001. From there the compositions move directionally away from such things to a tonal-rituality that is originally contentful  "The Ecstacies Above" (2006) has dramatic push and pull and works itself out intricately between choral and string voices. The musical syntax follows a motival sequence with variations around and upon it.

"I Listen to the Stillness of You" (2016) is a portion of "Mass Observation. " It sends us off with a beautifully melodic caress of lyrical sound.

The sum total of this inclusive O'Regan program is a significant mix of choral gems spanning the millennium to now. Each work stands out on its own and ultimately Istad and the Pacific Chorale paint a beautifully full picture of the composer and his lucid beauty of idea and form. I've listened countless times and each hearing opens out new vistas, so I have no doubt on this one. Enthusiastically recommended.
Posted by Grego Applegate Edwards at 8:09 AM