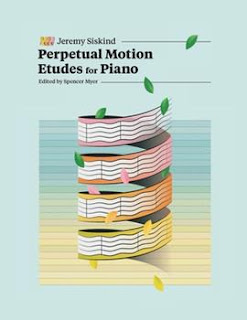 Jeremy Siskind's Perpetual Motion Etudes for Piano comes to us as a nicely recorded CD (Outside in Music OIM 2004) by the composer and then also a booklet of the music itself. These are virtuoso vehicles, some nine in all, that emphasize varying demands on the player and a nice variety of velocities and colors, all ever in motion, somewhere situated between the recent modernisms to be heard in Jazz players like Jarrett, Corea, acoustic Hancock and also some recent tendencies in Classical New Music tonality.

The inventive ease of this music makes the amalgamation seem natural and comes at the listener as ever-flowing. You hear polyrhythms, whirligig rotating velocities in the left hand, complicated rhythmic articulations and vivid harmonic-melodic colors that stand the test of repeated hearings to remain evergreen. There is a reflection of Brazilian Samba Jazz, a little bit of Hard Bop, an occasional balladic feel, rhapsodic and syncopated velocity, drumming-like independence between  the hands, a momentary blues progression, etc.

It runs a sort of gauntlet of motility possibilities in ways that are musically memorable. To hear the music is to explore those depths and I imagine to learn to play this music would be a further growing experience.

It is a worthy musical adventure and altogether piano music of substance. Check it out.