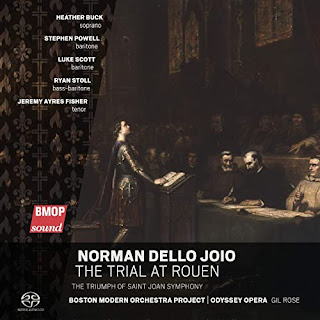 A sign of the seemingly unending potential in the contemporary abundance of works completed and composers working since 1900 I note as I open myself up to listen closely and carefully to various new recordings in the past decade. Some series are hands-down worth taking seriously in this light--such as the Boston Modern Orchestra Project under conductor-director Gil Rose.

The latest BMOP release only reaffirms their importance to uncovering neglected aspects of the USA Modernist scene. This time it is Norman Dello Joio (1913-2008) and his opera The Trial at Rouen (BMOP Sound 1073 2-CDs). I've long been exposed to his works yet somehow in the crush of life events have not until now come truly to appreciate it all. There were so many compositional voices in that period in the USA that we have not always gotten a decent window on some artist's works. And Dello Joio is up there as a very deserving example of one in need of revived attention, based on this fine release.

Wikipedia has an informative article on his life and work. Perhaps key there is the observation that he studied with Paul Hindemith, who encouraged him to develop his pronounced lyrical side, which was in some opposition to the atonal Modernism that was more or less dominant at that time. That fits in with a detailed listen to the Trial at Rouen (1950) along with the accompanying "Triumph of St. Joan Symphony" (1952).

What we have in abundance in both the opera and the symphony is an extraordinarily expressive through-composed inventiveness that works in diatonic-chromatic synchrony to give us along with orchestrational girth a extended beauty of lyricism that nonetheless has a hard edge to it. It is as gritty a music as it is luxuriously blooming.

Indeed it makes perfect sense that it should be so as the subject matter of the opera is dark, very dark. A woman, Joan of Arc,  has visions, hears voices, is branded as a heretic and the rest is the dark history we blush to contemplate, feel horror at its unfolding, wish it might be otherwise in our past. It is a hauntingly moody work, endlessly inventive brilliance in a superb performance.

The "Triumph of Saint Joan Symphony" has a perfectly complementary quality in this context, a ravishing study in light and shadow. The two in tandem give us a fascinating aural window into Dello Joio's meditations on the saint's life and tragic end.

Indeed, the composer in the liners tells us that St. Joan of Arc was a continual inspiration to him, an epitome of his own "struggle [and] fulfillment by sacrifice." And so it is.

In the end we are left with considerably worthwhile Dello Joio, pronouncedly expressive and lyrical, contemplative and singular. It is a wonderful introduction to the composer and a great addition if you already know his music. BMOP does it again and the singers of Odyssey Opera are first-class and up for the challenge! Highly recommended.

Posted by Grego Applegate Edwards at 8:13 AM