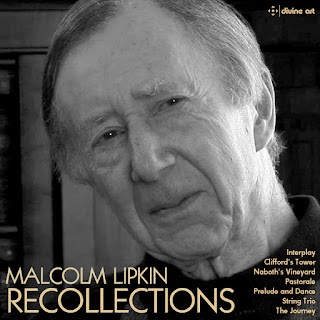 English composer Malcolm Lipkin (1932-2017) learned during his studies with Hungarian-British Matyas Seiber that a composition above all should be about the essential, with nothing redundant. Lipkin gained recognition in the 1950s and then later was sometimes seen as "old fashioned." Nonetheless he continued to follow his muse, becoming from the latter sixties on one of the pioneers in self-publishing. As I listen to this anthology in the course of the usual repeated hearings I do not find his synthetic and ultimately original eclecticism in any way old hat, but rather refreshing in its direct straightforward musical candor. Times can change!

The recent album of his works, Recollections (Divine Art dda 25203) looks at some seven compositions in a kind of retrospective sampling and spanning of the whole of his career from some of the first successes of the '50s to his very last pieces composed at the end of his long life.

The overall thrust of the program moves us to contemplate a sensitive, briskly lyrical non-dodecaphonic Modernist that thrives on inventive constancy and expressionist balance without veering into the High Modernist rhythmic abstractions of the more avant voices.. The music has the bark and bite of harmonic Modernity and chromatic open-field forwardness without necessarily straying into complete atonality. Or, alternately as in "Clifford's Tower" there is a coloring with dissonance and at times a going of some distance away from a tonal center, then processing back into a center once again. This sort of thing used to be anathema for Serialists like Boulez. but today we no longer find it so jarring to deviate from some kind of Modern "purity," do we? The point is that the music convinces without belonging to a particular camp.

"Clifford's Tower" performed by the Nash Ensemble gives us around 20 minutes of chamber ensemble adventure, vibrant expression, creative thrust. It is a work that seems ever more interesting the more one hears it. The String Trio is also especially appealing to me. Then there is "Naboth's Vineyard," which brings John Turner's excellent recorder playing into a trio mix with Nicholas Trygstad on cello and Janet Simpson on harpsichord for five miniature movements that cover uniquely a past-in-present focus on things.

This is music to experience ideally without a set of preconceived expectations. It is a valuable look at an English figure of the 20th Century worthy of exploring. It makes me want to hear his orchestral music as well. All Anglophiles take note. Worth hearing.