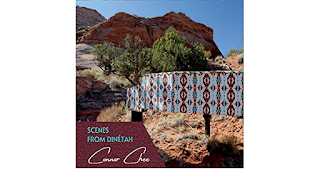 "Dinetah" is the Navajo Nation's name for itself. Navajo pianist Connor Chee's Scenes from Dinetah (Wild Saguaro Records) becomes comprehensible and welcome following that knowledge.  The album pairs twelve piano pieces with twelve brief preludes of poetic-descriptive Navajo texts conjoined in turn with succinct wooden flute and piano passages that flesh out the mood. The texts paint a particular scene, such as the first which translates from Navajo as "In the morning, I offer white corn pollen with my prayers." The prelude passages are atmospheric and they set the stage for the more substantial solo piano works themselves, which have a diatonic modality that relates back to traditional Navajo melodies indirectly.

While the music is quite peaceful, this is not to be confused with New Age music in that it is more substantial and more directed in its tonal melodic musicality. It is music that is quite lyrical and happily quite inventive while still retaining a Navajo feel to it.

I found that once I got past the first listen the musical content began to differentiate itself so that there was no mistaking the contentful individuality of it all. It is not entirely expected and so all the better for it. I recommend this one for anybody seeking restful yet concentric  pianisms.

Posted by Grego Applegate Edwards at 8:38 AM