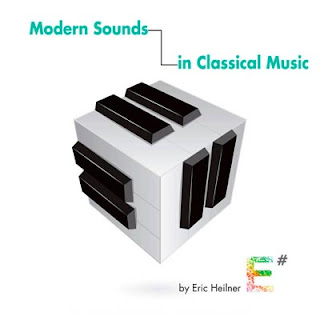 Who is Eric Heilner? A look on his website biography is most instructive. His father was Irwin Heilner, who studied with Roger Sessions and Nadia Boulanger and was a member of Aaron Copland's Young Composer's Group. Eric grew up in a Classical Music household. Piano lessons and hearing the Door's "Light My Fire" when it came out combined and he played a good deal of rock without becoming world famous exactly. although he opened for some legendary artists. He in time entered a  non-musical career, a common thing out there and indeed my experience as well.
In the 2000s the music bug bit him again and to make a long story short he began composing and rediscovered and extended his immersion in the classical greats. He studied at Julliard and the rest, the result is what you hear on this CD, Modern Sounds in Classical Music (self released).

We are treated to some six compositions in all. The style is Tonal Modern in a way that suggests a freely eclectic non-dogmatic openness, with an "ear-to-the-ground" response to a lifetime of musical experience.

From the first memorable strains of "Short Story for Viola & Piano" we hear an expressiveness and a dynamic that shows a pan-musical influence that incorporates Rock, Romantic, New Music, the underlying presence of Classical Era roots  and a sort of songfulness that perhaps comes with a vast musical hearing-playing that occurs in a full life?

"Bounce #3" puts a semi-metallic Rock guitar sound in touch with rocking piano, floating minimalesque winds and sometimes strident strings. It is a nice change from the typical these days. That is true of the program as a whole.

Another example "SQrt - Season 1 Episode 1" is a string quartet movement that clusters with two others for lively listening. This is music that breaks any pre-set mold and does so inventively..

If you are open to anything really musical in the New Music world and do not set your categories to hard and fast ones you will find this music a happy adventure I suspect. I am sympathetic to the "later in life" rediscovery of Mr. Heilner--since I too have a somewhat similar trajectory. He is no Folk Art Grandma Moses and perhaps that is for the best, There might be some "outsider" art connection one might make on listening though, regardless. And who says there has to be some unbreakable set of rules for what New Music must be? Eric Heilner has a natural talent and we are the better for hearing his music I would certainly say. Recommended.

Posted by Grego Applegate Edwards at 9:04 AM