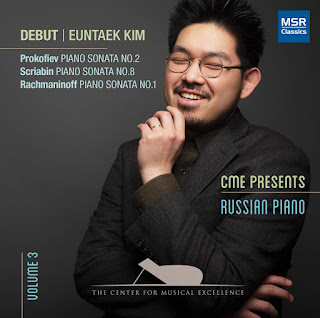 Pianist Euntaek Kim makes his recording debut on the very recent album CME Presents Russian Piano Volume 3 (MSR Classics MS 1745). The program gives us three Early Modern Russian classics from the early years of the 20th century. Anyone who is into Expressionist Russian piano will no doubt know these works--Prokofiev's "Piano Sonata No. 2" (1912),  Scriabin's "Piano Sonata No. 8" (1913) and Rachmaninoff's "Piano Sonata No. 1" (1908). Kim gives them all bold new readings.

All three works have a certain Expressionist turbulence to them, with Scriabin working towards the end of his compositional life and of course Prokofiev and Rachmaninov at the beginning. It was a time of cataclysm in Russia socio-politically and all three composers reflect their times in these sonatas. The Prokofiev is perhaps the most outgoing masterpiece of the three, a work not quite paralleled let alone surpassed, even by Prokofiev himself. That is not to say that the other two works are inconsequential--far from it. And to get them all here together is to understand how there was a certain convergence of manner, of affect that was rather beyond a typical Romanticism and into something heavily wrought and complexly Russian at heart.

I've grown up over the years listening to various versions of these works and have come to appreciate the way pianists like Richter and select others have accentuated the virtuosi veneer of these works--played often enough at the higher levels pretty rapidly with the emphasis on a supercharged velocity. What is distinctive about Euntaek Kim's readings of these works is a slower, more exacting articulation that brings out most clearly the musical joining together of part with part. The Rachmaninov sounds more deliberate especially, still turbulent but also judiciously weighted towards a logical sequential spanning of the whole.

What is true of the Rachmaninov holds true for the Scriabin and Prokofiev as well. Happily as many times as I've heard performances of all three works Kim's more pondersome versions give new life to the music to my ears and all the better for it am I. Euntaek Kim breathes new life into these chestnuts. Bravo!