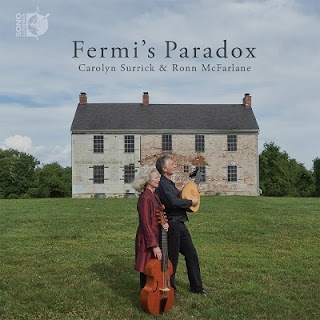 Fermi's Paradox is all about how we do not have evidence of other intelligent life elsewhere even though the promising conditions in some sectors of the Universe would seem to indicate that we should have already found at least some traces of it. Why is that?

The lute and viola da gamba album Fermi's Paradox (Sono Luminus DSL-92244) is a musical rumination on this conundrum, the entire album named after the magical opening piece lutenist Ronn McFarlane composed for the album. It's one of his three Folk-Early-Neo-Lyric song-like items he performs on the album with Carolyn Surrick on viola da gamba. They are excellent players both and well attendant upon one another's presences for these and some gem-like settings of old English Folk ditties, some Early Music pearls and some otherwise well-healed arrangements of other melodic excellences throughout.

The contrast and flow of the repertoire makes for a continually high listener interest level that's to the gallantry of the performances and beautify of the parts working together.

So we get gigs, jigs, reels and wonderful feels out of such fare as the traditional Irish "She Moved Through the Fair," the English classic "John Barleycorn," the traditional Swedish "Sjungar-Lars Visa" to name a representative few, then Early Music savories by the likes of Dowland, Marin Marais, Hassler, Bach, Telemann, and then present-day surprises like Duane Allman's "Little Martha," plus staples like "Ave Maria," "Amazing Grace," etc.

It is the refusal to stay put in one definite period or genre that makes this of a somewhat surprising appeal, and by that I mean it surprises because everything hangs together even though one would not expect to combine and sequence them all in quite this way.  McFarlane is a marvelous lutenist, as subtle as he is accomplished and Ms. Surrick makes a perfectly vivid contrast with her own supreme musicality.

Get this one for the sheer pleasure of it.

Posted by Grego Applegate Edwards at 9:16 AM