Michael Hersch, I Hope We Get A Chance to Visit Soon 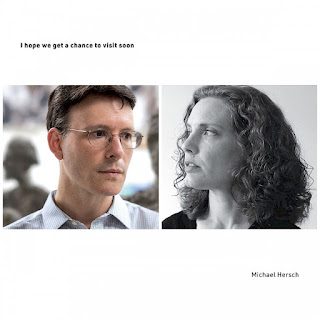 I write in spite of my inclination lately, for we live in somber times. I've heard news commentators in the last few weeks assert that we live within a mental health crisis, with long-term effects of pandemic and politics, and the accompanying stress of everyday life taking its toll. I myself am not joyously happy these days, though I maintain a balance anyway. Surely some folks in the headlines lately seem disturbed; their actions might best be explained by a chronic point of reference in ir-reality, not to mention a-sociality?

So is this a time to hear music on a decidedly down frame of reference? Not any less than it is always timely to take in a Shakespearian tragedy, for example. In such cases transcendence is the point. I've said such things here before. It is of course critical that the music be well done, or else why bother?

Today I offer you some thoughts about a great example of such a thing, I Hope We Get A Chance to Visit Soon (New Focus Recordings FCR 251)  by Michael Hersch. It is a 16 part dramatic narrative work for two sopranos (Ah Young Hong and Kiera Duffy) with a chamber orchestra (Musicians of the Mahler Chamber Orchestra conducted by Tito Munoz).

It is a live recording from the Aldeburgh Music Festival and most certainly is high quality sonically. Clocking in at a little over an hour the present performance of the work seems definitive.

The work reaffirms the importance these days of Michael Hersch as one of the leading living voices of US High Modernism. I've covered a fair amount of his music on these pages (type name in search box above for those).

This one looks at the gradually unfolding trauma of a woman who finds she has a tumor that turns out not to be benign. The two sopranos express the progression of the affliction both matter-of-factly and poetically. It follows on the heels of Hersch's "On the Threshold of Winter" (2012) based upon texts by poet Marin Sorescu, who died of cancer in 1996.

The present work Hersch conceived of as a companion piece and comes to terms with the loss of a close friend, Mary Harris O'Reilly in 2009, also from cancer. The texts for "Hope" are based on letters O'Reilly wrote Hersch plus poetic fragments by Rebecca Elson.

The music and sung text follow the steady progress of the cancer in spite of medical interventions. In the liners Christopher Hailey notes the rather unprecedented aestheticizaton of cancer in both works and indeed it is not your usual dramatic focus. On the other hand the absolute sincerity of the treatment helps us in feeling this as an unforced memento mori of a dear friend, with the obvious care that went into setting these texts.

Perhaps only those who have lost friends or family in slow procession to the inexorable march of cancer can fully appreciate the nuances of this drama. The music is within Hersch's high expressionist syntax and we relate the musical structure understandably with the emotional turmoil of gradual loss. And yet we do it primarily in terms of the internal experience of the patient. We come to feel personally the endless struggle as she must have, and the music portrays it in elaborately stark terms, in a readily express manner you who know Hersch's ways are not surprised to hear.

This is sad music but as one might hope music that in its very artfulness adds both tribute and transcendence, and gives dignity to the long suffering progression it immerses itself within.

Is it the musical equivalent in a way to plunging in an ice-cold stream after spending time in a sweathouse? It may shock the sensibilities by its unstinting honesty, but it remains always the expression of a high art.