Jordan Dykstra, The Arrow of Time 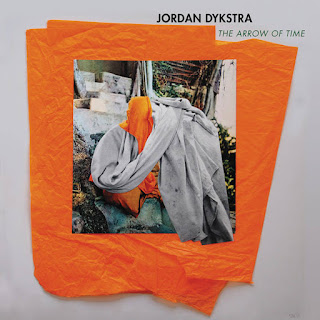 To read all of Proust, to look into representations of time, to experience Bergman's Seventh Seal  is to alter the way you experience life, or at least that's so to me. Now it is time for me to add Jordan Dykstra's The Arrow of Time (New World 80823-2), a CD that's been out for a few months but has caught my attention definitively in the last week.

It consists of five varied but nearly cinematic works, culminating in the title work. Jordan Dykstra, the liners tell us, has been on the music scene for 15 years, classical, improv, avant garde, etc. The music we hear on this new program proceeds with both deliberation and openness, with conventional chamber ensembles and/or electroacoustics. And I am so glad I have this to hear again.

There is a timeless timefulness to this music, which oftimes involves successive layers of sustain with changing timbral colors, gradual unfoldings that have a wordless narrative quality, yet they "mean" without saying, brightly so.

Throughout, the music forms and unforms as drones, harmonies, and sheer sound space. All has the abstraction of meaning more so than the sheer materiality of things. As the music continually builds and shifts, we experience a kind of cognitive motion within self as a kind of analog to the aural experience. Or anyway I feel that listening.

By the time we get to "In the Snow" (2018) (for violin, viola and cello) the sustains are slow moving with brief silences that mark out a periodicity, and so bring us to a post-hypnotic way of experiencing it all. Then comes a mid-section where glisses are added starkly at the beginning of each sustain for contrast. They disappear after a time for the feeling of a making bare again, perhaps roughly standing for the white bareness of an increasingly gathering snow cover?

"The Arrow of Time" (2019) finale puts us down in a new place as it builds with piano, siren, drumbeats and "fixed media playback," into a very narrative-formed unfolding that seems almost Bergman-like in its evocative quality, complete with an unrelenting pulse that evolves into the tick of an ancient clock that in turn evolves and gets reinforcement via complementary contrast sounds. As you listen it feels like time is inexorably there and makes itself felt with real aural force, moment to moment. Bravo to this one! It is unforgettable in its own way.

After a few hearings I gradually came to find deep form and meaning in it all. Jordan Dykstra chimes in with real importance. And he manages to hit home whatever he does here. Is this the music of the future? Who knows, but it certainly captures a recent feeling, a place where we are as it so all happens. And part of the point is the "so all happens" feeling of this music. Hurrah!

Posted by Grego Applegate Edwards at 9:48 AM