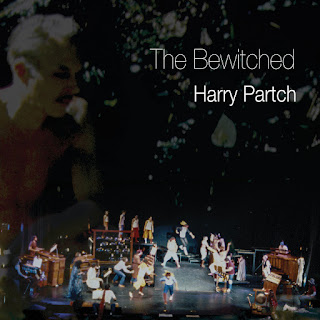 In a century remarkable for its musical fomentation (in the sense of a "poultice"), its inclusion of Harry Partch (1901-1974)  was perhaps one of the most revolutionary developments overall. His pioneering aggregation of an entire orchestra of newly invented instruments, his groundbreaking forays into alternate tuning and his compositional acuity made him special even in a special age.

The recording and release of his Delusion of the Fury after its 1969 premiere was perhaps the most decisive moment in recognition he was to experience in his lifetime. But of course there were other releases and performances that gradually built his reputation prior to this.

Nowadays of course we happily find there is more of him to hear. For example his "dance satire" The Bewitched  has been performed and recorded more than once in later years. Not having experienced either I was glad to find that  Neuma Records has issued the 1980 Berlin performance of the Partch Ensemble under Danlee Mitchell. It is "binaural" and very much focused and clear enough that you get the idea of what it was like to sit in the audience.

The music combines some of Partch's home-made percussion complexities with conventional instruments and vocals. Because of that kind of mid-positioning aurally it is not nearly as dramatic as "Delusion" but for anyone who loves Partch it is a most welcome, ambitious addition to our understanding of his overall opus. It is worth your time.

For the reason of good performance I heartily recommend it to any Partch enthusiasts. If you do not know this one it will open up a new vista. Those that do not know Partch at all however might start with Delusion of the Fury. This one is essential for the Partch fan or completist. I am very happy to have it myself. I am glad to recommend it.

Posted by Grego Applegate Edwards at 8:16 AM