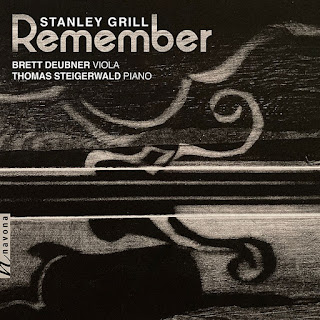 Listening to unfamiliar composers requires ideally a kind of clearing of expectations. Then whatever is the case stands out the more readily. Such was my frame of mind when I first listened to composer Stanley Grill and his album of music for solo viola, and viola and piano, Remember (Navona NV6338).

Stanley Grill was struck by music very early in his life when his mother took him to Carnegie Hall to hear Debussy's  "La Mer." The result was a musical awakening that translated into his initial deep absorption in playing piano and, after an initial introduction to music theory at the Manhattan School of Music, in composition. He was to study with Leon Kirchner, Robert Helps and others before setting off as a compositional artist in his own right. His avid love of Renaissance and Medieval music has influenced his compositional style, his approach to melody, modality and counterpoint.

The compositions in Memory no doubt reflect this but in the first hearing of this music what comes across most readily is a lyrical folkishness, a beauty born of inner sensibility and then what the music does not take on--namely any overt Classical-Romantic influences. In the end there is tonality but in some universal timeless expression. Yes, you will after communing with the music feel some connection with Early Music too. In the end of the experience it matters that it feels fresh and directly inspired by a musical sensibility that ends up seeming original, and it follows of course not in some predictable sense!

If you begin your listen with his treatment of the "Battle Hymn of the Republic" you get a pretty good idea of his general musico-compositional approach as you recognize the melody in sometimes startling new settings.. The solo viola pieces give the instrument a wealth of fiddle-like double stops and a kind of archaic country feel. The works for viola and piano afford the listener a multi-voiced, worked-through counterpoint at times and a special approach to harmony at other times.

Violist Brett Deubner and pianist Thomas Steigerwald realize each piece with an unaffected brilliance and sympathy. They seem just right for the music. The five single or multi-movement works lock into a peaceful, pastoral openness that feels timeless and universal at heart. Stanley Grill is a phenomenon who at least with these works crafts a directly accessible presence that seems would appeal to a wide spectrum of music lovers in addition to the serious followers on what is happening in New Music.

Just as advanced tonality has very much further to go to explore itself exhaustively, so we see also does tonality-modality. Very recommended.

Posted by Grego Applegate Edwards at 9:25 AM