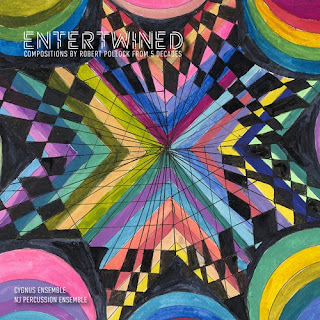 In the ever unfolding world of New Music sometimes it is all about how novel and unprecedented the music is on some level. Other times it is about how well written, how inventive it is. Today we have something of the latter.
Robert Pollock is a name that did not ring bells for me when this CD arrived recently. Entertwined (Furious Artisans FACD6827), which is subtitled Compositions By Robert Pollock From Five Decades, is a program of some seven chamber works that are thoughtfully and lucidly made up in ways that hold their interest as a whole on first listen and distinguish themselves even more so with repeated listens.

The music has a logical flow to it in the capital /M/ Modern sense. Harmonically sophisticated and slightly edgy, the works hold together well while they keeps an exploratory sensibility that translates into novel solutions and avoids cliché.

Pollock stands out first of all for his imaginative scoring for the classical guitar, as heard on "Romance-Fantasy" for the Anderson-Forsyth guitar-piano duo, "Cygnature Piece" for the Cygnus ensemble of guitar, cello, mandolin, violin, oboe and flute. Then there is "Entertwined" for two guitars, "Metaphor" for solo guitar and "Revolution" for violin, contrabass, flute, clarinet, bassoon, horn, marimba, percussion and guitar. Throughout the guitar writing is fresh yet idiomatic and enters into dialogs as a distinct yet equal participant.

On the other side of Pollock's instrumentation choices are his "Chamber Setting #2" for the New Jersey Percussion Ensemble and "Metaphor" for solo vibraphone, both very interesting in their own right. These works reminds us of Pollock's heightened and naturally forward moving sense of rhythm, but then all the works have something of that going on.

The biographical details of Robert Pollock help us to situate him in space and time. He was born in New York City. He got his BA in Music from Swathmore College, followed by an MFA in Musical Composition from Princeton and a Guggenheim Fellowship in Composition. From there he embarked on a noteworthy career that has included organizing and presenting numerous concerts, headlining recitals and concerts as pianist, composer,  etc., founding-directing some key New Music composer guilds, serving as composer-in-residence for several institutions, and being the recipient of numerous awards and grants. After many decades and more than 149 compositions we enjoy some chamber gems in this album and look forward to more.

The rather vast time span of this program, 1976-2007, forms a testament to his unflagging compositional imagination and steady unfolding development as an original voice that well deserves our recognition and appreciation.