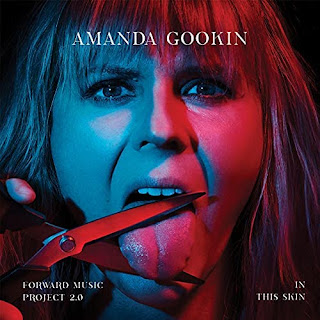 The old adage about the importance of how ("It Ain't What You Do It's the Way That You Do It" as the Jimmie Lunceford Band recorded it long ago) seems to apply meaningfully to the recording up for review today--cellist Amanda Gookin's In This Skin (Bright Shiny Things BSTC 0456), being the second in Gookin's "Forward Music Project" Series, which in total aims to present  and "promote radical empathy and feminine empowerment" as the liner notes put it. You might call them "character pieces" I think. In the end they all express an aspect of a strongly feminine outlook, and that convincingly, not just any old way.

What strikes one as one first listens is how much the five compositions, each designed expressly for the artist and presented to us as premier recordings, how much each work fits into an expressive and intimate series of "sketches," all of which include a demanding solo cello part, vocals either pitched in song and/or recited as literary texts, all that come to terms with the tensile strength of being a determined woman in the world today. Each work was designed to challenge Ms. Gookin to encounter performance artistry a bit out of her comfort zone, with extended techniques, vocal interjections and electronic world building effects, all of which hold together remarkably well. Joining her effectively in cameo rolls are Chelsea Loew and Solmaz Badri on vocals for the opening work, and Sxip Shirey on electronics for the work by Paola Prestini.

Every piece in its own way identifies a world of self-knowledge, courage, determination to prevail. And so we encounter the strengths of an immersion in the now by talented contemporaries Niloufar Nourbakhsh, Alex Temple, Ms. Prestini as mentioned above, Kamala Sankaram and Shelley Washington.

The absolute artistic success of the entire endeavor is somewhat of a rare thing, given the ambition to combine a literary set of poetic communications that go together with vocal text and song, electronics and beautifully articulated cello performances. On one she adds a kick drum and that works, too. Ms. Gookin plays each one of these like she lives heartily in the contemporary now and is uniquely qualified to express it all for us with exceptional understanding and artistry. No doubt we live in an era when the confessions of straight white men have become tiresome, though of course that can be a political weapon as much as ever? Amanda Gookin and her composer colleagues help us put all of that out of mind to appreciate an authentic set of identity character pieces that work on numerous levels at once and do not sound forced or artificially eager in ways that might not convince.

That says a great deal of Amanda Gookin and these very capable and now-some composers. It is New Music with NEW out front and in advance, happily. Very recommended.

Posted by Grego Applegate Edwards at 10:38 AM