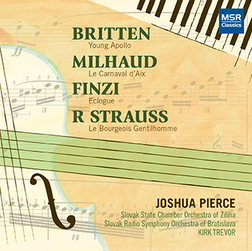 Of music there can be no end, so long as there is a humanity to make it. And as long as I am here I will be glad to hear it, any of it that's worthwhile. So this morning I turn to something recent that I appreciate quite a bit. It is pianist Joshua Pierce and either the Slovak State Chamber Orchestra of Zilina or the Slovak Radio Symphony Orchestra of Bratislawa, both under conductor Kirk Trevor. They join together in a program of 20th century music for piano and orchestra (MSR Classics MS 1756), all fitting together quite nicely as very musical tone paintings with the emphasis less on overt virtuosity so much as musical fullness and depth. So none of the works have gotten all that much concert representation of late, not that I know of anyway, perhaps because they do not have much of the bravado of a typical concerto?
At any rate the music has an infectious verve and energy about it all, and does not strike one as Modern in the capital /m/ sense so much as a kind of Neo-Classical sometimes, and on occasion slightly Neo-Romantic in passion or frisson? And then perhaps a hint of Impressionism too?
Each piece deserves our attention and interest, even if some we might not have heard so much in our lifetimes. The fact that Pierce gives them a concentrated and playful attention that the orchestra matches is all told an excellent reason why one should take this release quite seriously, and happily so at that.

It is all good. Beginning with Britten's striking "Young Apollo for Piano and String Orchestra, Op. 16" we traverse a wide swatch of fully enthralling music. The Britten reminds us how adept an orchestral colorist he was. Then we move into rather unfairly obscure Milhaud "Le Carnaval D'Aix," then the rarely heard gem of Finzi's "Eclogue for Piano and String Orchestra, Op. 10" and finally Richard Strauss' "Le Bourgeois Gentilhomme Orchestral Suite, Op. 60" which in part breaks from the typical Richard Straussian mode to instead give us a more Neo-Classical way than we are accustomed to hear in him, and that is refreshing.

And all in all--crisply articulate and refreshing is the program as a whole. Bravo Pierce, bravo Trevor and bravo orchestras. This one is a charmer and a welcome addition to 20th century piano and orchestra possibilities! Hear it and I think it will get you going.

Posted by Grego Applegate Edwards at 10:26 AM