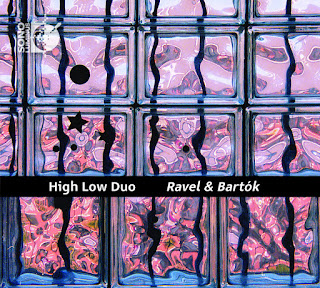 Transcriptions and rearrangements of classical works for different instruments and instrument combinations have been a constant part of the music world ever since the Middle Ages. The piano was often enough a popular transcription choice in the days when the parlor piano was a staple of Euro-American everyday life and a reasonably skilled pianists were common enough in music loving families--so that sheet music sales of such things were a good bet if a particular opera or orchestral work was well known enough that a piano version would appeal as a way to rehear at leisure in the home such a work. But versions for two guitars were understandably not a common thing.

So all the more welcome for its rare quality as well as its excellence is the album by the High Low Duo (Jack Petruzzelli and Cameron Greider) entitled Ravel & Bartok (Sono Luminus SLE-70023). It has a nicely balanced program of the well known (a version of Ravel's "Ma mere L'Oye" or "Mother Goose,") and the somewhat lesser known but equally vibrant in six of Bartok's "44 Duos for Violin".as arranged for two electric guitars.

The guitarists sought to utilize the special qualities of the electric guitar (as over and above the "classical" acoustic guitar) to match and further the composer's aural conceptual structure in each case. I must say the duo gives us convincing sound color manipulation and in so doing breathes new life into the music and its sonic possibilities.

Greider and Petruzzelli impress greatly with their virtuoso sound and control. Every bar of this program is a delight. Molto bravo! Hear this one!