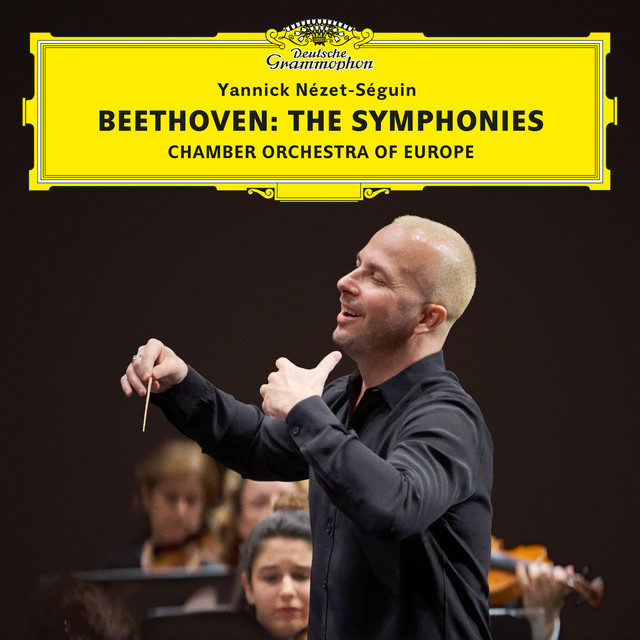 When I was coming of age as a serious follower of things Classical I naturally found my way to Beethoven's glorious symphonies, at first a fine old reading of his Eroica by Leonard Bernstein in the Music Appreciation Series that came out I guess in the late '50s. From there it was Bernstein and the NY Philharmonic doing the 9th and so on, culminating in the complete symphonies on a box set as the NBC Orchestra conducted by Toscanini--renditions of great passion and fire but at times acoustically  challenged in their primitive audio qualities. I most naturally fell into hearing other versions of most of the nine but never another complete set.

Nonetheless what a treasure trove it all has been for me over my life. The great depth of the Eroica, the human triumph of the Ninth, the beautifully prototype of the Romantic nature symphony of the Pastoral 6th, there is an unparalleled adventure of the nine in sequence, and symphonic composers thereafter too as a kind of paradigm, perhaps they never quite overcome the startling brilliance of the Beethoven but they did successfully create parallel swarms of symphonic bliss when all went well.

And the Toscanini recordings helped define the 20th century vision of it all, on recorded media: a rather large orchestra and hugely big and emotive explosions of sound at their peaks. The revolutionary 3rd, 5th, 6th, 7th and 9th were what conductors and orchestras of note expended the most attention on, and of course for good reason. Yet one could also open to the real charms of the 1st, 2nd, 4th, and 8th, but if it were a matter of large and fire-y explosions these were not the very best place to find such things.

Skip ahead to right now, and a new recording of the complete symphonies by the Chamber Orchestra of Europe as conducted by Yannick Nezet-Sguin (Deutsche Grammophon 486 3050 5-CDs).

As for conductor Yannick Nezet-Sequin, type his name in the search box above for some nice programs he has conducted recently. He is a meticulously accurate yet spirited exponent of the symphonic repertoire as I have heard him so far. But that did not necessarily prepare me for what comes to us with the Chamber Orchestra of Europe and Nezet-Sequin taking on the nine Beethoven symphonies.

First off of course is the chamber symphony quality of the nine as realized here. The lesser number of strings puts everything into a new balance, as indeed the master composer must have been intimate with in a normative performative situation. Perhaps indeed this is how he initially heard the music in his head and in the concert halls. The woodwinds naturally come up in the balance, forming more of an equal partnership with the strings. What that does to the 1st, 2nd, 4th, 6th and 8th at least as focused in on here is a set of works that turn out to be innovative and revelatory less in terms of being Late Romantic in potentia as rather being Late Classicist taken a step further. The melodic peaks in both these and in the blockbuster 3,5,7, 9 symphonies have a new lyrical edge that puts the balance less in fire than in fire and warmth, so to speak. There can be a wonderfully brisk quality to some movements that comes together very impressively in the symphonies we have paid less attention to, but also a wonderful Pastoral that reads more coherently, and then shifts the emphasis on the blockbusters as well.

So for example the funeral movement of the Eroica or the scherzo of the Ninth both have a new poignancy and we can hear lots of other wonderful moments when we close listen to it all. Nezet-Seguin deserves most of the credit for knowing how to bring out the new emphasis and balance in these chamber orchestra readings, but of course kudos are in order for the orchestra itself as well.

I could wax on about each of the symphonies and how the performances here differ from a typical 20th century reading, but it all applies in various ways so the best impression to be gained is to listen to it all yourself, of course. I suspect nearly everyone who loves this music will benefit from hearing these versions, but too it is a good place for the novice to start as well. It capitalizes on what the early 19th century perhaps assumed in performing these wonders. but then perhaps this kind of reading also speaks fully to where we may be musically in the new century.

Make note that these performances are all from the "urtext" that has been constructed in each case in the new Beethoven Complete Edition. So all the more reason to appreciate the results!

I do not hesitate warmly to recommend all of this to you. It is a triumph in every way. Molto bravo!

Posted by Grego Applegate Edwards at 10:31 AM