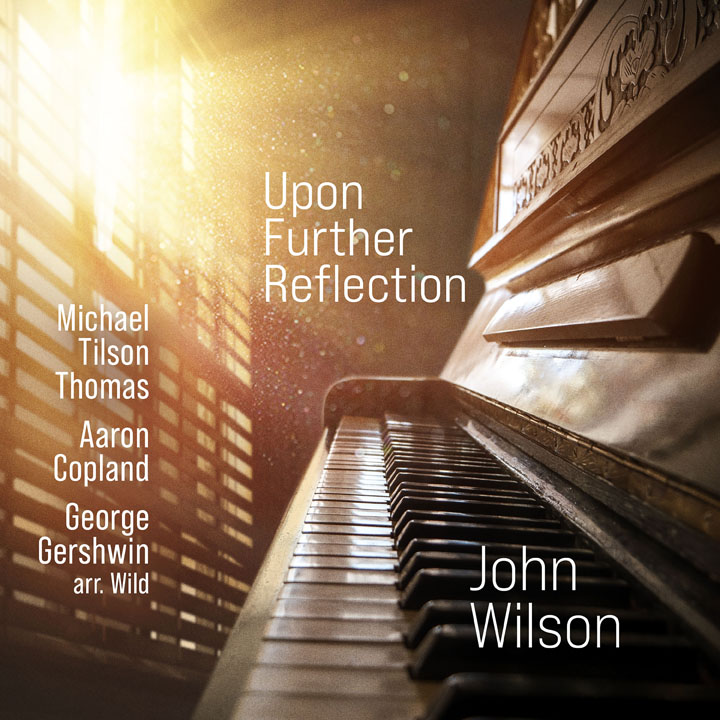 Americana is a term applied to mostly North American composers, mostly in the 20th century, with music that has a pronounced vernacular tinge, Jazz, Country, Folk, etc. The term Nationalism has been used in the Classical worlds to denote that similar trend in various countries and locales from  the late 19th century onwards. Because it simultaneously denotes a political-cultural stance that has historical associations with fascist definitions of monolithic hegemony it may be better discontinued for some alternate descriptor?

Well this is not the place to go on further about terms and etc. We do have a very lively and enjoyable album however in the Americana category with pianist John Wilson's Upon Further Reflection (Avie AV2458). It covers a judicious yet brief sampling of things familiar and less familiar, played with care and kinetic power throughout.

There are nice surprises and assuring confirmations to be heard. Of the former, the world premiere recording of Michael Tilson Thomas's "On Further Reflections" is a big, gainly, sprawling success in its High Modern Blues inflection, with a goodly amount of virtuoso pyrotechnics that never seem gratuitous so much as they are driven by the organic dynamic of it all. And then the middle movement has a brittle bittersweet lyrical matter-of-factness that spells the work and provides a kind of island of difference. I will admit I had no idea what to expect since I have scarcely heard his compositional output. I was happy to find it all convincing and very well wrought. Bravo!

The Aaron Copland Piano Sonata is not familiar to me but turns out to be a modern expressionist gem of chordal and melodic engagement one can come to expect when Copland is edging to the side of abstract purity. It has the tasteful tang of complex dissonances that place it squarely in a then ultra-Contemporary mode. And it suggests the momentum of Americana rooted strains without especially referencing anything directly. And it stands out as a work one hopes other pianists will turn to more often, since it well deserves a wide hearing most certainly. I am rather astonished that I never really heard this major opus before,

In sum this is some wonderfully adept pianism and John Wilson has complete command of it all in spite of its considerable demands. Strongly recommended.

Posted by Grego Applegate Edwards at 10:47 AM