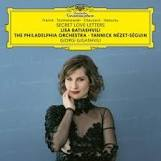 In the realm of the development of Classical Music history over time of course we know how music in the Romantic phase paid new and more focused attention to depicting feelings and sentiments. And then as time passed composers perhaps found a new emphasis on the expression itself and a language of highly evolved  and increasingly variable forms of expressing ever less literal and eventually more and more abstracted and superchromatic soundings in early Modernism.
That movement out of Later Romanticism is captured in a kind of freeze frame series in a lively album of violin and orchestral, and violin and piano works,  loosely grouped under the rubric Secret Love Letters (Deutsche Grammophon 486 0462). Each work expresses the secret love idea and I will leave it to you to read the liners for all of that spelled out.
Violinist Lisa Batiashvili teams with pianist Giorgi Gigashvili or the Philadelphia Orchestra under Yannick Nezet-Sequin as called for. The violin performances are ultra-magical, delicately feelingful and expressive in a varied sense, marvelously so. The piano and the orchestra form a perfect foil and express all one might hope for in these works.

The four works represented here are above all beautiful and lyrical, melodically and harmonically. They afford the solo violinist a maximum of expressive opportunities and interpretive openness that Ms. Batiashvili fulfills with real brilliance and panache. It is all told a series of works of true singing, classic late Romantic and early expressive Modernism. And so we go from French and Polish pioneering flights through Romanticism and its depiction of signified feelings to another shore and the future in so-called Impressionism and a new emphasis on expression, on the musical signifier. And funny perhaps but musical Impressionism is less like the painting of "nature" and more like further 20th Century developments in art and music. Literally it is not lily pads in various forms of repose because it is not literal like that, as music there is of necessity and in its own right too a heightened level of abstraction.

The Franck "Sonata for Violin and Piano in A Major" in this performance  is extraordinarily beautiful and lyrical, yet complex. Szymanowski's "Concerto for Violin and Orchestra No. 1" is very expressive in a sort of variegated, airy mysterioso. The Chausson "Poem" has a little less of the orchestrally mystical, shows a little more impassioned a tone but no less poetic for all that. The closing Debussy "Beau soir" comes across as brief, yet sweet.

In the end this has great charm and elan. I do not hesitate to recommend it highly.

Posted by Grego Applegate Edwards at 9:42 AM