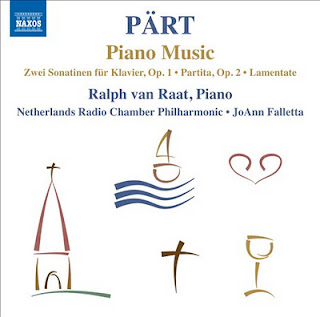 Arvo Part no doubt occupies a rather central position as one of the world's foremost composers. He is known for many things, but his piano music is not especially one of them.

So when pianist Ralph van Raat offers up a new disk devoted exclusively to this part of his oeuvre, people like me take notice. Piano Music (Naxos 8.572525) covers most of his career: solo works begining with his Opus One, the fascinating neo-classical/modernist "Zwei Sonatinen fur Klavier" (1958/59), through other interesting works spanning the '50s, '70s. and the '00s. Finally there is the 2002 work "Lamentate: Homage to Anish Kapoor and his sculpture 'Marsyas', for piano and orchestra", for which van Raat is joined by the Netherlands Radio Chamber Philharmonic under JoAnn Falletta.

The Opus One set of sonatinas gives you the Part of not-so-latent talent, a gifted young composer who shows the influence of Prokofiev and Stravinsky. The later works increasingly reveal his own meditative style, which culminates in the fully idiomatic "Lamentate." It's a sensitively and skillfully executed program of some interesting music. It is not all brilliance and light. It does offer revealing glimpses of the composer's development, sometimes via a kind of rummage through the "attic" of earlier works, some neglected, but all well worth hearing and well performed on this disk.

The disk is worth it for the early solo works alone; it is also worth it for the performance and presence of Part's "Lamentate". Put the two aspects together and you have a highly recommended program!
Posted by Grego Applegate Edwards at 4:54 AM