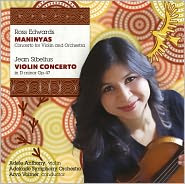 We hear in violinist Adele Anthony a bright young star launching into the firmament. She has beautiful tone, great facility, impressive phrasing and a rhythmic drive that is very fitting to the works at hand. For this, her recording of Ross Edwards's Maninyas and Jean Sibelius's Violin Concerto in D Minor (Canary Classics 09), she is joined by the sonorous and very well-prepared Adelaide Symphony Orchestra under the direction of Arvo Volmer. There is a marvelous give and take between soloist and orchestra on both pieces and Volmer draws out the orchestral nuances that in turn are used as a means for Ms. Anthony to take sonoric virtuoso flight in rather breathtaking ways.

Her cadenzas are marvelous. But it is in her interpretations of the central written parts that Adele especially excels.

Both the Edwards and Sibelius concertos have in common a folk element and a rhythmic vitality that orchestra and soloist bring out well. The allegro passages of Maninyas have a Stravinskian-Reichian rhythmic-cellular thrust that Edwards transforms to suite his own total-harmonic palette and the aboriginal theme. The center chorale is tender and lyrical. This piece was heretofore unknown to me. After hearing Ms. Anthony and Maestro Volmer proffer their version of it on this album I must say I am now a true believer.

The Sibelius concerto of course has been performed countless times since it was written. There have been many wonderful recordings. Anthony and Volmer offer an interpretation that ranks among the best. Adele draws out the romantic, rubato passion inherent in the score without sacrificing rhythmic motility. It is a singular thrill to hear her performance here. I have heard more of the folk element drawn out in other versions, but for the ravishing beauty of her execution Adele Anthony's interpretation nears the very best.

In short this disk is vibrant, impressive, and highly sonorous. It is an example of the excellence of Australia's Adelaide Symphony, the finely detailed interpretive nuances of Arvo Volmer's take on these two works, and the impressive powers of Ms. Anthony. Highly recommended.
Posted by Grego Applegate Edwards at 5:07 AM