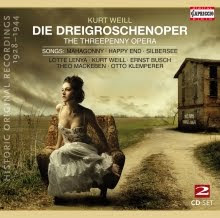 Kurt Weill and Bertolt Brecht's classic Der Dreigroschenoper (Threepenny Opera) and the cabaret operas that followed form perhaps the single body of classic-modern works most in need of more authentic period interpretation. The pieces were conceived and performed in a '20s-'30s European-cabaret-two-step jazz style that musicians of today have no experience of for the most part; the style of singing--emphatic, declamatory, with vibrato-drenched sarcasm--is perhaps even more difficult to reconstruct. The result is, apart from Lotte Lenya's admirable revival recordings on Columbia in the later '50s, there have been mostly a host of well-meaning performances that essentially miss virtually everything but the melodic contours.

Thankfully we have recordings from the era that faithfully capture the full essence of the works as originally conceived. A 2-CD set available in the States just now is the Capriccio (5061) 2-CD Die Dreigroschenoper/O Moon of Alabama: Historic Original Recordings 1928-1944. It's one disc of various recordings of selections from Threepenny and a disk of selections from three ensuing works: Mahagonny, Happy End and Silbersee. With Threepenny you get the eleven-cut original cast recordings from 1928-30, which give you some definitive versions of around half the work, a 1929 arrangement for winds, selected foreign language versions from the era, and some instrumental dance arrangements. The second disk covers a selection of theater songs from three other productions as noted.

As far as a listening experience goes, one must keep in mind that especially on the first disk there are multiple versions of the most popular songs from the opera, all interesting but subject to a certain amount of repetition.

Beyond that however, this is is something all Weill admirers must hear and appreciate if they are to understand what a modern production must try and realize. Weill was an exceptional melodist but he was also a musical revolutionary in the way he adopted the venacular of the day. The powerful and not to forget, dangerous subjects of the songs and their subversive (to the Nazi thugs) criticism of the world around them are delivered fearlessly and with the kind of dramatic thrust that the theater-cabaret of the times encouraged. A special vibrato on the part of singers and instrumentalists, proper jazz-pop inflection by the instrumentalists, and a kind of fervent conviction are all up front on these recordings.

The sound is what it is--these are 78s that for the worst sort of reasons became rather rare by the end of WWII. The sources used for mastering are all in respectable shape, but one mustn't expect holographic digital clones of the reality of that era. This is as close as you'll come to that, though, barring the invention of a time machine. Essential listening!
Posted by Grego Applegate Edwards at 5:52 AM