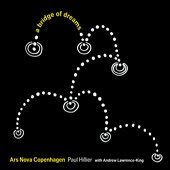 Paul Hillier happens to be the world's premier choral conductor to my way of thinking. As principal conductor and musical director of the choral group Ars Nova Copenhagen he shows himself as champion of new music that has been heavily influenced by early and/or archaic musical forms, an important trend from the last half of the 20th century through to today. The new CD A Bridge of Dreams (Ars Nova 6.220597) puts Hillier and the marvelous choral group in a rather wondrous zone for a program of music that shows the influences of both the classical past and the East Pacific. Subtitled a cappella Music from the Pacific Rim, for this CD the idea is that all composers-works represented here have important multiple associations with the coastal Pacific. All the composers hail from Australia, New Zealand, California, or China, respectively, and all in some way or another address Eastern Pacific thematics.

Lou Harrison's Mass for Saint Cecilia's Day is a work from his later period (1983) utilizing transformations of Gregorian Chant, resituated in part within Chinese and Balinese tonality. Ann Boyd's enchanted A Bridge of Dreams is based on an anonymous Medieval Japanese Woman's text of the same name. Jack Body's Five Lullabies have a strong medieval polyphonic influence as well as traditional Chinese elements. Ross Edwards combines psalm texts with aboriginal bird names for Sacred Kingfisher Psalms. Finally Chinese composer Liu Sola gives us The Seafarer, a suite from his opera The Afterlife of Li Jiantong.

All of this music has an ambiant quality, thanks in part to the pieces themselves, to Paul Hillier's/Ars Nova's highly melifluous renditions, and to the very resonant recording space of St. Paul's Church, Copenhagen. There is a constancy that is both post- and pre- minimalist, interestingly. These are very beautiful works, beautifully done. There is timelessness conveyed in the music, a confluence of past, present, and, perhaps, future. Don't neglect this one. A Bridge of Dreams may find you spanning the length of one somnolescently. . . repeatedly.
Posted by Grego Applegate Edwards at 5:13 AM