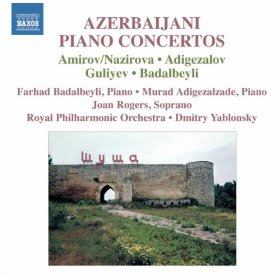 The modern concert music of Azerbaijan does not often find its way to the west. There was a recent Naxos disk of the music of Amirov (see my review posting of April 9, 2010 at gapplegatemusicreview.
blogspot.com) and a few others, but not much else that I know of.

So the present release Azerbaijani Piano Concertos (Naxos 8.572666) is most welcome. It's the Royal Philharmonic Orchestra under Dmitry Yablonsky, with alternating piano soloists F. Badalbeyli and M. Adigezalzade, working their way through two full concertos and three shorter pieces.

The music reflects the cultural influences to be felt in the region in the 20th and 21st centuries. Much of it has an appealing minor tonality that is part of the heritage of eastern/mideastern traditional music, but there is also a Tchaikovskian-Rachmaninovian strain to be heard and in some pieces the influences of early modernity. Amirov and Nazirova's "Concerto After Arabian Themes" (1957) has much of the romantic-meets-mid-eastern flavor alluded to above. Adigezalov's Concerto No. 4 (1994) continues in that vein with a bit more modern elements. The three shorter, single-movement works are pleasing, with Guliyev's "Gaytagi" (1958/1980) generating the most excitement.

It is a collection of music that doesn't hit home as world-class singularity. It does give you an interesting view of what some Azerbaijani composers have been doing. And the performances are good. Those who like a little exoticism will find it here.
Posted by Grego Applegate Edwards at 5:26 AM