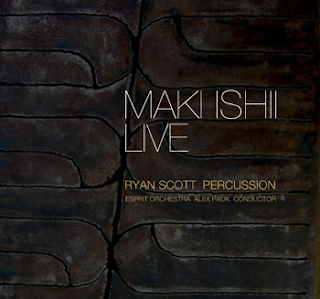 The Japanese composers of the 20th century who did the most, to my mind, to bring together modern classical orchestral music and traditional Japanese music: Takemitsu, Mayuzumi and Maki Ishii. It is to the latter that we turn today, in a live performance of three of his gems by Ryan Scott, percussion, with Esprit Orchestra under Alex Pauk. Maki Ishii Live (Innova 809) is a well-captured performance first aired on Canada's CBC Radio. Three Ishii percussion concerti are represented. They have some very intricate solo percussion parts which Scott plays from memory.

So it's not just that Ryan Scott has memorized the parts, of course; he plays them with musicality and fire. The orchestra sounds well too. These are works that belong to the later period of Ishii's output when he was especially concerned with incorporating traditional Japanese elements. "Saidoko (Demon)" was completed in 1989, "Concertante for Marimba," 1988, and "South-Fire-Summer" in 1992. All three have an intensive dynamic between percussion virtuosity & fire, and orchestral luminosity. They are excellent examples of Ishii's mature style and are played here with brightness, hard-edged thrust and a mastery of tone-color blending.

This is one of those recordings that SOUNDS great. There is presence and a sound staging that translate well to the speakers-in-a-room world of home listening. First-rate music, first-rate performance, first-rate audio quality.
Posted by Grego Applegate Edwards at 10:57 AM