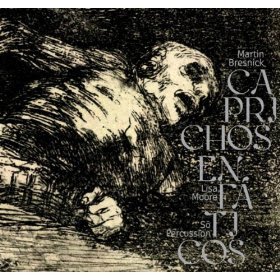 The 30-minute work Caprichos Enfaticos: Los Disastres de la Guerra (Cantaloupe 21075) is a meditation on the famed anti-war etchings of Francisco Goya. DVD projections of the Goya imagery are to be introduced in the course of a live performance of the eight movements of this work. Pianist/keyboardist Lisa Moore and So Percussion as a quartet give us a stirring performance, sans projections, of course. But though this may be somewhat programmatic music, it is music to hear, first and foremost, so the lack of visual correspondence is not a major factor.

There is an episodic, literary quality to the work which reminds me a little of some of George Crumb's chamber music. For example, there is a movement where the drums pound out the rhythmic ostinato from Holst's "Mars, the Bringer of War," but it becomes disjointed and disrupted as the piano interjects expressive chordal rejoiners as if to represent the forces that do not directly engage in the battles, those who perhaps do not whole heartedly approve of the carnage, or perhaps the victims?

It is well performed and well staged for the CD medium. Ms. Moore plays spiritedly and the rhythmic versus a-rhythmic elements balance nicely in her hands. She doubles on a harmonium in the later movements and gives out with a kind of earthy chorale folksiness. Similary the So Percussion Quartet provides a commanding performance of their part.

It is music as sound painting, a sort of "Pictures at an Exhibition" narrative style transposed to the post-modernist present. It is a work of power and a meditation on war and its horrors. If the music does not quite convey the macabre imagery and indignant disgust of the Goya etchings, I suppose we should not expect a literal correspondence.

What it is certainly bears hearing. Martin Bresnick writes music that stands out, that speaks with a grammar and syntax much his own. At this juncture in our history the subject matter is as timely as ever.
Posted by Grego Applegate Edwards at 5:10 AM