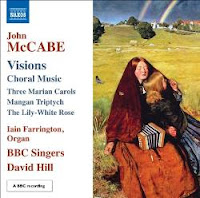 It may be that composer-pianist John McCabe is better known for his work with other configurations, but after many listens to the newly released Visions (Naxos 8.573053) his choral music is imprinted firmly on my musical thought waves. Surely here he carries on as a most distinguished embodiment of the English modern choral tradition, a worthy successor to Elgar, Vaughan Williams and Britten.

More than half the album album presents the BBC Singers (under David Hill) a capella. For the rest they are joined by organist Iain Farrington. They sound very good, full and center-on throughout.

The works cover a very broad period, from 1966 to 2008. They range from the brief Marian Carols to the rather long Mangan Triptych. Four of the works enjoy their world premiere recording in this collection.

McCabe seems to have a natural affinity to choral writing. The works have great "singability" and beautifully wrought part writing, from modern contrapuntal to stunning harmonic blocks that sound especially well.

This is a recording that should bring much pleasure to lovers of the choral arts, Anglophiles, and anyone who wishes to explore some gems of our time.