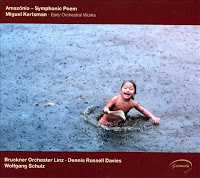 Brazilian-American composer Miguel Kertsman may not be on everyone's radar at the moment, but the disk Amazonia (Gramola 98959) gives a good sampling of his early orchestral music and should increase his exposure among cognoscenti.

There are three substantial works on the disk, all performed with good presence and dash by the Bruckner Orchester Linz under Dennis Russell Davies.

I suppose you could say that, in the early period at any rate, Kertsman's music is pretty lushly neo-romantic, but in a post-Villa-Lobian way. The Chamber Symphony No 1, "Acorda!" has a vocalise for soprano that reminds one a little of the latter.

Sinfonia Concertante Brasileira for Flute and Orchestra has a longer three-movement trajectory, a pretty brilliant flute part (well played by Wolfgang Schultz), and the full breadth of orchestral drama with a definite touch of exotica and expressive writing that projects nicely. The Largo is ravishing and the final Rondo "The Dumb Donkey Called Jackass" has a humorous lumbering quality that appeals while also reminding a tad of the Villa-Lobos of Bachianas Brasileiras. It was written in 1987 to protest the wanton over-development of the Amazonian rainforest.

Amazonia is a fairly short symphonic poem with more of the evocative orchestral expressivity one experiences in the other works. One cannot hear this music without being reminded of Villa-Lobos's Forest of the Amazon, and not in some imitative, derivative way. There is a genetic relation between Maestros Villa-Lobos and Kertsman that, at least in Kertsman's early period, brings him into the picture as a successor, an extender of a Brazilian orchestral heritage.

The music will most certainly appeal. And Davies gives it his careful enthusiasm. It's very likable music and makes me want to hear Kertsman's more recent works.