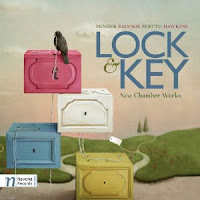 New Music comes along in many shapes and sizes these days. The Lock and Key (Navona 5881) anthology of chamber works by relatively unknown composer illustrates that rather well.

Scott Pender's "In the Time Before" is a chamber ensemble playing a melifluous kind of minimalism that has the motor-insistency of a Steve Reich with expansive melodic lyricism on top via strings and sometimes flute. It goes its own way with the melodic material and in this way captures a bit of originality while being pretty snugly fit into a typical Reichian minimal mode.

R. David Salvage turns to a more modern harmonic, non- pulsating expressivism to begin his nine-movement "Albumleaves" for solo piano. It goes from there into a sort of neo-classicism with fugal counterpoint dominating here, then a chorale-like piece there, more expressionistic pieces, a pulse-oriented, non-formulaic series of shifting figures, and more neo-classicism, this time of such an elementary, primal nature I am tempted to dub it lyric simplissimo. This is appealing music to while away an afternoon. Nothing terribly profound but quite nice to hear.

Daniel Perttu's "Gloamin': A Fantasy for Flute and Piano" is more dramatic in a sort of romantic-impressionistic way, with the flute part soaring expressively against a shimmer of shifting piano tonality.

Finally there is Malcolm Hawkins "Bonjour Ma Petite" for chamber ensemble. Five miniature movements hold forth in a lyrical diatonicism that I am inclined once again to dub simplissimo. It's very straightforward music of a naive, home-spun sort and it charms without making claims to profundity. There is a sort of vernacular small-town feel to this suite at times, but it in no way panders thereby. And the melodic-thematic content becomes less naive at times and a bit more "sophisticated," but the simple charm of the music persists.

There you have it, four composers working on tonal grounds with their own stylistic concerns. This is music that pleases without asking a great deal in return. It is music of a generally light-hearted sort. It is not pretentious music and the performances reflect that matter-of-factness of the compositions well. If that sounds good to you, then you will no doubt find this to your liking.