Jeffrey Stadelman, Messenger and Other Works 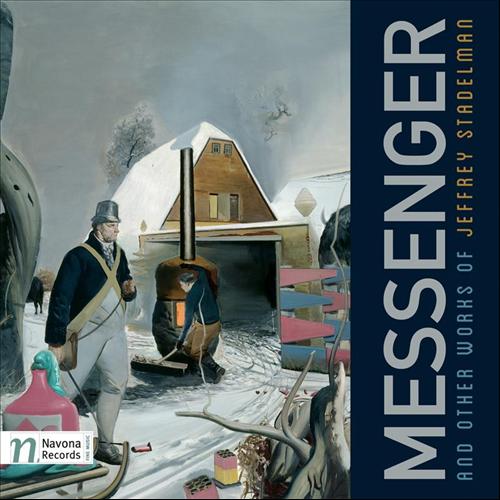 Composer Jeffrey Stadelman writes the sort of music that has modernist breath and originality. His Messenger and Other Works (Navona 5896) gives us a bracing selection in a variety of configurations.

The title piece "Messenger" (2010-11) is a major offering in three movements for orchestra. It has swirling kaleidoscopes of sound in an expanded tonality. It shows an excellent feel for orchestration and sound-color painting, sonic contrasts of high drama and virtually endless invention. The Moravian Philharmonic under Per Vronsky is in excellent form throughout.

"Nine Bagatelles for Piano and Recorded Sound" (1987/2012) has wide leaps and complex pointillistic counterpoint. The heroically difficult piano part is played rousingly by the composer. The electro-acoustic part adds a second dimension that sequences with the piano for an almost concerted piano electro-ensemble interplay of an ultra-modern kind. It is music of endless fascination to me.

Finally we have a brief electro-acoustic movement "Koral 19" from a much longer work. It is fascinating and invites anticipation for the complete opus.

That's the run-down. The CD gives you an excellent introduction to what is a first-tier composer in the high-modernist tradition yet having clearly something of his own to say. I hope subsequent volumes appear in time, for Stadelman writes music we should all hear. Recommended.