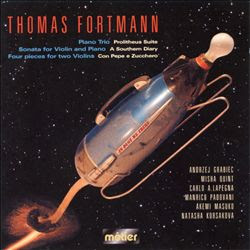 Thomas Fortmann, of Swiss origins, was before turning to serious composition a successful songwriter and rock artist through 1977. That was in Europe--in the States I do not believe he was very well-known. It is no matter though, because his chamber music is of interest regardless of whether we knew his music before or not.

There is a CD out with three interesting works, called In Dust We Trust (Metier 28534). It brings to us a Piano Trio, ("Prolitheus Suite") in five movements, a Sonata for Violin and Piano dubbed "A Southern Diary" and 4 Pieces for 2 Violins ("Con Pepe e Zucchero").

The music is often quite expressive, sometimes rather boisterously forte, and combines a modern harmonic extendedness (sometimes built upon twelve-tone sequences and transformations) with vernacular forms, like ragtime, the blues tinge, Vaudeville songs, rock, and a melodic flair in general. Fortmann is "world local" at times in ways that remind slightly of Bartok in that mode, folksy yet modern-serious in his melding of various local musics--not Swiss especially, but the local as more universal to the West at large.

One must spend some time acclimating to his sometimes dense dramatic and well-turned musical lathe before you start appreciating his art and craft at their true value. There are thematic elements of an extra-musical nature that further enhance the associations the music can call up in one's imagination, but in the end what counts is a very palpable sense of structure conjoined with an artist's attention to emotive power. The performances are quite fine.

Thomas Fortmann has a vivid, inventive soul. The music will get to you in time if you allow it. Bravo and encore!