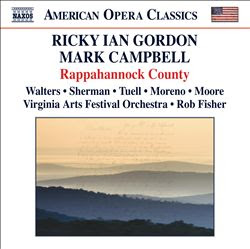 I grew up in the North where there was a prevailing view about the Civil War. I still hold it. Essentially the viewpoint was that Abraham Lincoln and the abolitionists were heroic, the underground railroad was a monument in bravery, slave owners were at best misguided, and at worst.... And the Civil War was an unfortunate necessity. U. Grant is on one of the monetary units because he was the primary General who won it. There were some kids in school whose families had migrated northwards and many of them thought the South should have won. I jousted with them on many levels. Now I am an adult and I feel no different.

And when the 150th anniversary of the Civil War comes upon us, I find nothing changed in my own mind. Nothing special occurs to me. So when an opera, or really a musical theater work on the Civil War came out, I was happy to listen but had no idea what I'd hear. That work is with us today, on a 2-CD set. It's Ricky Ian Gordon's Rappahannock County (Naxos 8.669028-29). The libretto was created by Mark Campbell, inspired by diaries, letters and personal accounts of residents of Rappahannock County, Virginia, and their experiences and thoughts on the war. The Rappahannock River symbolically and geographically divided North and South so it is a region fraught with metaphoric qualities and so also a fitting locale for the story.

These are slices-of-life vignettes, a series of some 30 characters speak to us--sing rather, a series of solos for the most part, sung well by five vocalists, accompanied by the Virginia Arts Festival Orchestra. All sorts of characters come before us and tell us their thoughts, their hopes, their anguish. Essentially it's a tragic view. My sympathies were aroused by those who were victims of the sheer fact of living in the South though not slavers or approving of it, then of course the slaves themselves. I find it more difficult to feel for those who were "States Rights" advocates, and those ideologically committed to the plantation system as it existed then. Nonetheless I can't conceive of this theater piece on the subject without bringing in the spectrum of folks who were a part of the region. So after a certain point I concerned myself more with the contours of the music and less to what the characters had to say.

As musical theater this has an affinity more towards something like Sweeney Todd than Wozzeck, or in other ways it is musical in more of the way of a musical or perhaps parts of Nixon in China than a high modernist, high ambition sort of formalist work. That is in no way to disparage the music. It's more in a kind of popular-ist vein, which is not to say that it isn't well put-together or "serious" in its way. The music has a melodic flow not as much in a song a-b-a way but in terms of through-composed declamation-soliloquy. It's well done for that and Gordon clearly succeeds, perhaps triumphs here. The CD set includes to round out the program a song suite Late Afternoon, for mezzo-soprano (Margaret Lattimore) and piano. It reminds me favorably of Barber's "Knoxville: Summer of 1915," rather largo-esque in that way, yet with a contemporary flavor nonetheless. It has similarities lyrically as well, in how it encompasses personal incidents, reflections, experience, about a time passed.

In that way it fleshes out a more complete picture of Ricky Ian Gordon the vocal composer. In the end we see an artist of talent, giving us two works that do not attempt to be cutting edge, yet reflect an acute musical sensibility. That's my take. Performances are all very good. And in the end there is much to think about. War is never a wonderful thing. Ultimately abolition did not fix matters completely, as we well know. It was a painful period for many. You hear that in the personal narratives. All in all this is vocal music anybody interested in the contemporary should hear.