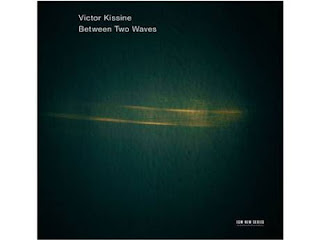 From the last several albums covered on these pages, you would think that the composer of today has gone to sleep and dwells in his dreams evermore. And maybe that is so. But composers have always sought to create a world-within-a-world. It's perhaps only this moment for me when I realize fully how much that world inside has changed, along with the outer world we live in during wakefulness. That such a feeling should be brought home to me today by an exact contemporary of mine, born in the very same year, is totally fitting, especially since I have of late been appraising the changes that I have experienced over my life thus far. For this music brings to me its own summation of being here and having been here for the same period. I respond. As a kindred soul.

Victor Kissine's album of works in premiere recordings, issued in celebration of his 60th birthday year, Between Two Waves (ECM New Series 2312 4810104) provides yet another stunning musical universe for us alive today. The Russian contemporary gives us three works, two for the celebrated orchestra Kremerata Baltica and soloists, and one a duo for viola and cello. Kissine is executionally high modernist, with rhythmic actuality abstract and diffuse, the strings often using much in the way of present-day coloristic effect. And the music itself owes something to Xenakis and early Penderecki in that sort of planetary-event feel. The music can be tonal or extended tonal, but it is more dreamed than harshly explosive, more otherworldly than Bauhausian, more new baroque or new impressionist (without a trace of reference though) than new romantic, but prismatic, refracted, drifting towards us and then away, gently.

Kissine shows us just how much he is his own self on the three works. The title work "Between Two Waves" is a poem in sound for the piano of Andrius Zlabys and Kremerata Baltica, not so much a concerto as a mutual exchange of dialogues of a non-combative, non-virtuoso nature. "Duo (after Osip Mandelstam)" puts Daniil Grishin's viola with Giedre Dirvanauskaite's cello for one of the most moving modern string duets I have yet to encounter. The lines are so strong and the ECM sound so cavernous you forget that there are only two string players. The work is highly expressive yet softly, emphatically, somnolescently awakening and existing off-planet somewhere for us to hear.

"Barcarola" begins with a dreamily suspended feel that interrupts itself with poignant exclamations and exhortations from the violin of Gidon Kremer in a more concerted vein. The string orchestra and percussion part has a highly distinctive sound with its own counterthrusts of sound color. A more periodistic ride through a different sort of dreamcloud dramatically appeals, and it is also a fitting end to this rather stunning trilogy of works.

All three works are definitive Kissine--utterly otherworldly in a very original way. Cosmic yet accessible. Near yet far. Invitingly spacious yet emotionally renewing. The music is wonderfully performed, beautifully audio-staged and magnetic in a most masterly way. Kissine speaks his own musical language and yet we need no interpretor to help us understand. It's a musically intuitive speech we comprehend utterly and take to heart.