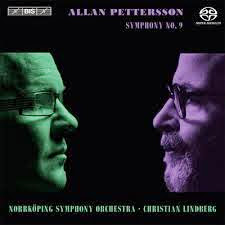 Swedish composer Allan Pettersson (1911-80) stands out as one of the more enigmatic figures in 20th century symphonic music. In his later period he rejected the "pure" modernism of serialism then in fashion, instead creating works in a highly personal idiom, long sprawling works that contained atonal, pantonal and tonal modes in juxtaposition. They tend to be on the dark side.

That should serve as an introduction to what is at hand today, a recording of Pettersson's Symphony No. 9 (BIS 2038 SACD), as performed by the Norrkoping Symphony Orchestra, Christian Lindberg conducting.

The release contains a bonus DVD of the 81-minute biographical documentary "Vox Humana", filmed between 1973-78 and originally aired on Swedish television. It is mostly in Swedish with English subtitles.

That documentary brings us a vision of Pettersson's early childhood as brutal and poverty-stricken, his musical tutelage as precariously subject to the exigencies of European historical developments, such as the Nazi occupation of Paris where he was studying viola at the time.

The advent of his long and serious affliction with rheumatoid arthritis and kidney disease in his final decades had great impact on his music. He was an invalid and shut-in while continuing to compose. The struggle to overcome became key to his music and both its heroic and dark qualities, as the DVD implies. His afflictions get a portrayal that has moments that are nothing short of harrowing. Christian Lindberg, a long-time champion of the composer and sponsor of the DVD comments in the end that Pettersson shares something of the personal outlook of famed filmmaker Ingmar Bergman. And that rings true. You might think of Pettersson as the symphonic analog of Bergman and it would not be wholly nonsense to say it.

And yet the music stands on its own without such analogies. Between 1953 and 1980 when he composed most of his output he wrote a total of 16 symphonies. It is as a symphonist that he is known since only a few works were not such. By the time he wrote his 9th he was fully immersed in the stylistic particularities of his mature period.

It is a long work (70 minutes) in one single movement. The symphony seems to represent a never-ending struggle. Passages of dissonant turbulence, chromatic clashes and ultra-advanced yet continually forward moving passages rub against tonal moments that offer the promise of brief refuge only to be enveloped again in the symphonic sea of motifs that ever surges forward. Peace and resolution are only obtained in the final "amen" of the symphony.

It is a symphony at once both intensely dramatic, epic in its masterful treatment of a large orchestra, and in the end an affirmation that struggles are a real part of life, but that they do end in one way or another.

No one wrote symphonies in quite this way before him. The originality is there along with a tenuous connection with the largess of a Bruckner or a Mahler. He uses the orchestra masterfully in ways not entirely removed from these giants. But it is music that bears the undeniable stamp of Petterssonian originality and the modern age in which he lived. As the DVD makes plain, Pettersson champions the voice of "man", the endless struggle to overcome the darknesses of our times.

The performance has authority. It is most likely the definitive version for many years to come. Christian Lindberg understands Pettersson, that is clear. And the orchestra gives a heroic performance. The DVD offers extraordinary insight into the composer.

If you want to know something of Allan Pettersson's music, here is the ideal starting point. Or if you know him this will be essential listening. Either way it is a seminal work in a definitive performance. What more can I say? Enough.