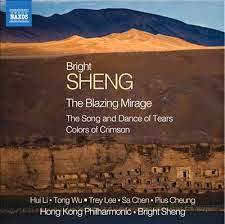 We all know something of the story of how classical music, jazz, blues, rock and (for better-or-worse) pop styles have diffused out of Europe or America and developed regional versions throughout most of the world.

The newly forged music (some now 100 or more years old) features localized forms that often draw upon indigenous music traditions in a cross-breeding process that usually creates something much more than the sum of parts.

The local flourishing is no less important than the initial impetus today. If we want to gauge what is going on in any serious music category we must look to the world and what evidence of human creativity and achievement that we find.

Bright Sheng (b. 1955) a Chinese composer coming into prominence over here via a new disk of his compositions, is an excellent example. The Blazing Mirage (Naxos 8.570610) presents three major works as performed by the Hong Kong Philharmonic and soloists under the composer's direction.

What's impressive from the beginning is the full integration of local elements and the modernist symphonic outlook into an original and cohesive style. Each work lasts approximately 20 minutes and contrasts soloists and orchestra in concerto-like dialogs.

"The Song and Dance of Tears" (2003, rev. 2013) showcases the traditional Chinese pipa and the sheng, along with cello and piano in a work that draws inspiration from the collection of ancient folk music the composer collected in a special field trip organized to that end along the inner borders of China more than a decade ago, following a musically lesser-examined yet crucial portion of the historical "silk road" trade route.

"Colors of Crimson" (2004) has a rather striking solo marimba part and has as its basis a love song the composer wrote as a young musician in China years ago.

"The Blazing Mirage" (2012) concentrates on pitting the orchestra against a very expressive solo part for cello. It was inspired by the 4th century Buddhist frescoes and manuscripts found in the Dunhuang Caves.

Each of the three works has its own special quality but together they show a composer of a thoroughly modern cast who nonetheless incorporates something of his heritage. The result is a music of today that has both local and international thrust.

These are works to experience in depth. There is a sure-handed orchestral flair to them and the solo parts do all they should to expand the colors and melodic movement of the works. And the performances are very good indeed.

Bright Sheng gives us formidable music on this disk. By evidence of these works we need to be hearing more of him! Very much recommended.