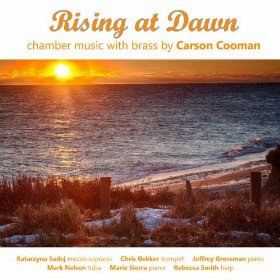 Of all living American composers, Carson Cooman is among the most prolific, or at least so I understand. We looked at his organ music a couple of weeks ago. Now it is time for another recent release, Rising at Dawn, Chamber Music with Brass (Metier 28538).

The organ music disk showed Cooman in a very idiomatic organ mode. The present collection of works broadens our vision of his musical personality considerably. There are eight chamber works contained on the disk, written between 2005 and 2011. Most are fairly brief, except the several movement pieces. Three are for solo piano. The rest are for trumpet, flugelhorn or tuba in prominent relief.

If you were to pigeonhole Cooman's style here, to give you an idea of the music, you would say he is closer to Hindemith than Boulez. He is not a serialist, but he sometimes stretches the harmonic base in a modern way. Other times he is consonant, so to speak, but not in a romantic or especially neo-classic sense, more of today.

All the works presented have genuine substance. A brief song cycle, "Chasing the Moon Down" makes effective use of mezzo-soprano, trumpet and piano. Other works follow for solo trumpet, flugelhorn and harp, trumpet and piano and a very effectively vibrant "Sonata for Tuba and Piano" (2007) in three movements.

The performances are excellent, the works memorable and well put-together, and the sequence of works quite pleasing.

This is a winner. It serves as an admirable introduction to the composer in a chamber mode. And for the brass-a-holics out there it is something you must not miss.