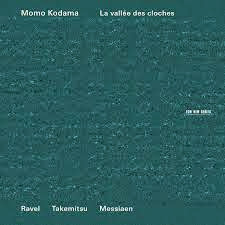 Change-in-continuity is such a factor in listening to classical music that often we can experience a composer and a particular work as it relates to the past, as it relates to the music to come, or simply in its own right. Often all three factors can enter into play when you feel receptive to a work. Momo Kodama and her release of solo piano music La vallee des cloches (ECM New Series B0019862-02) invites us to hear Ravel as he sets the stage for a later, more modern impressionism that goes beyond itself vis-a-vis the music of Takemitsu and Messiaen.

We of a certain age I suppose are used to thinking of a real break between the impressionists and high modernism, though in some cases the differences from work-to-work are more incremental than an abrupt displacing would suggest. The harmonies get more advanced and rhythmically there can be sharp contrasts, but deep down there is connectivity.

It may take an artist that has real affinity for the ways of a particular line of musical development for us to feel the similarities more directly than with other performers. And the choice of works of course are critical.

This is something that I think as I listen to Momo Kodama's recital. Ravel's "Miroirs" suite was a real eye opener when I heard Ravel's touch-sensitive piano roll rendition on an old LP years ago. He played it all rather slowly and the attention to sheer intervallic, sensuous interplay awoke me to some of the beauty I had missed, but also helped me hear more of the modernity in the music. "The Valley of the Bells", the final movement of the suite, especially seemed more than just evocative to me.

Ms. Kodama gives us a sparkling reading of the suite, in some ways close to Ravel's own reading, but a touch more expressively poetic. It is a beautiful sonance in any event, made even more so by the artistry of Momo Kodama.

When the program leads us into Toru Takemitsu's "Rain Tree Sketch" from 1982, we do not feel so much that we have left the path Ravel set out for us in 1904-5, but that in fact we have moved further along it. And surprisingly, with Messiaen's later masterpiece "Fauvette des jardins" (1970) we continue to feel affinity and a family kind of resemblance.

Part of that is the deft way Ms. Kodama has of handling the complex phraseology of Messiaen's bird-song abstractions. She makes the figures breath so that the complexities have a comprehensible syntax that we can more readily assimilate.

And in the end the three works seem related in their poetic transformation of nature and the human experience of place. They seem part of a continuum, perhaps ideally experienced in the time of the year where nature flourishes, the beginning of which marks the time I write these words and hear this music.

What matters I suppose is that Momo Kodama gives us marvelous readings of these 20th-century composers, keenly attuned to their worlds, seeking to capture it all in vibrantly poetic terms. Perhaps now that we have a number of years in the new century under our belt we are better served to hear the connections and the poetry. This is masterful music heard as from a distance in time. Ms. Kodama does the music perfect poetic justice.

We are all the better for this recital. I recommend that you immerse yourself in it.