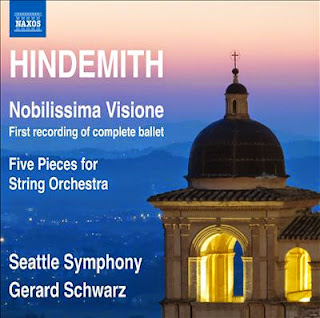 Sometimes Hindemith has gotten a bad rap--mostly because at the end of his life he did not adopt serial composing techniques. These days that matters not at all. Perhaps it even shows gumption. Hindemith was a composer who was thoroughly a modern part of his times but preferred to follow his own muse. And so much the better for us, his present-day listeners.

I've covered a fair amount of his music on these pages, but today there is something a little special, that is the first recording (by Gerard Schwarz and the Seattle Symphony) of the entire ballet Nobilissima Visione (Naxos 8.572763). I still have a scratchy old Angel LP of Hindemith conducting "Symphonic Dances", an orchestral suite excerpted from the full ballet score. This version is the one that has been available on recordings thus far. Though it is fine music it is about half the length of the full ballet, which runs at about 44 minutes.

And that long version is what we get here. There is nothing superfluous to be heard. It all works together and sounds whole and organic.

The ballet has something of a complicated genesis. Hindemith had the idea of a ballet based on the life of St. Francis of Assisi after he and Leonide Massine met in Florence to discuss a possible ballet collaboration--this was in May of 1937. Hindemith was inspired by Giotto's frescoes on the life of St. Francis that he saw while there visiting the church of Santa Croce. The images were so moving he decided to address something of the saint's life through dance. In its final, complete form it was premiered in London in December 1938. At the last minute on publication the title of the ballet was changed from "St. Francis" to "Nobilissima Visione".

That is the basic story. The score is remarkable in its interweaving of early music folk-art song into the score, made into Hindemithian material by virtue of the composer's special stylistic synthesis which by then of course was fully mature. The incorporation is so subtle it is not obvious to the ordinary listener without score in hand. But nonetheless there is a lyrical element present at times which alternates with passages of tutti orchestral power and therein the pre-coached listener can find restatements of the themes involved.

Schwarz and the Seattle Symphony do us a real service with their excellent performance of the entire work. They give it the full treatment, dazzlingly spectacular and tender at turns.

As a nice bonus the disk gives us Hindemith's 1927 "Five Pieces for String Orchestra" which was a work designed for performance by young or amateur players to get an experience of playing music that was relatively easy to perform (all parts written in the first position) yet rather complex and chromatically modern. The "Five Pieces" are the final works in the series. With the first-class Seattle string section they totally convince as music that goes far beyond pedagogy. They stand on their own as serious music and typically early Hindemith at his best.

So here we have a major event, a great recording of artistically and historically important Hindemith. Needless to say this is an essential Naxos release that nobody who follows the modern path can afford to miss.