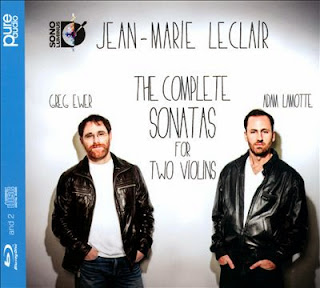 The baroque French music of Jean-Marie Leclair (1697-1764) does not have a great deal of currency or circulation these days, at least in my world. But after hearing the Greg Ewer-Adam Lamotte recordings of his The Complete Sonatas for Two Violins (Sono Luminus 92176 2-CDs and Blu-ray) I find myself gravitating towards his music, happily.

The full set of sonatas takes up two CDs. The music is varied and lively. According to the liner notes it was during his stay in Italy, studying with Quantz and violinist Giovanni Battista Somis, that Leclair's music took a decisive turn. In those days, double- and multiple-stops were unknown to the classical violin in France. Leclair picked that up from Somis and absorbed the bravura style of the Italians in general, though the violin sonatas still show much of the refinement typical of the French school of the era. This you can hear to excellent effect on the sonatas.

Greg Ewer and Adam Lamotte do a fine job performing the works. They capture the natural buoyancy of the music, giving us readings that are both sweet and dynamic. The combination of multiple-stops and the way the voicings are constructed bring you a full sound that forwards the perception of a larger group than is the case. The liner notes cue us to listen for that and indeed, you can readily hear it throughout.

As with the bulk of Sono Luminus releases, there is a standard stereo mix (on the two CDs) plus a 5:1 version on a Blue-ray disk. Either way the sound is excellent.

Those who appreciate spirited early music performances of works not well known will revel in this music. But the album affords a good deal of pleasure regardless of your background. It's an excellent set!