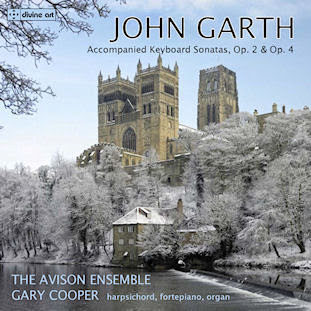 Can you imagine being composer John Garth (1721-1810), organizing a bi-weekly series of concerts in Durham city, England, where he achieve some modest fame as composer and cellist? When he wrote his Unaccompanied Keyboard Sonatas, op. 2 & op. 4 (Divine Art 2-CDs 25115), he of course hoped for good performances, a good turnout and a favorable reception. But could he have hoped, some nearly 300 years later, that someone such and you or I would get a chance to hear the sonatas again in recorded form? Could he scarcely imagine some such possibility or had he no thoughts of all of the possibility of posterity? I have no answer to this question yet here I sit at my computer typing these lines in 2014, listening to the very music he wrote back then.

John Garth was no CPE Bach, certainly, yet there is a period flavored freshness and vivacity to these works, as nicely performed by the Avison Ensemble with Gary Cooper as keyboard soloist on the harpsichord, early fortepiano and organ.

He is chiefly known for these works, the cello concertos and a few similar pieces, much of it available on Divine Arts as played by this ensemble.

What it certainly does is opens you up to the lesser-known English composers of the era. John Garth was no slouch. On these sonatas the keyboard part is far more the out front, virtuoso vehicle for Garth's ideas. The two violins and cello that form a part of the music have the role chiefly of reinforcing the accompaniment figures and seconding the solo melodic line. This is more rococo and jaunty than deeply contrapuntal or gravitas. That was the age and he excelled at the rather happy extroversion of his times.

The individual tang of early pianoforte instruments, harpsichord and organ help individualize each sonata and give it character. The ensemble plays these pieces with enthusiasm, an infectious sort. I found myself listening with pleasure each time.

Anglophiles of the music of this period will respond readily. But I suspect anyone with an interest and appreciation for the earlier forms will feel positively about the program and its performance. Good show!