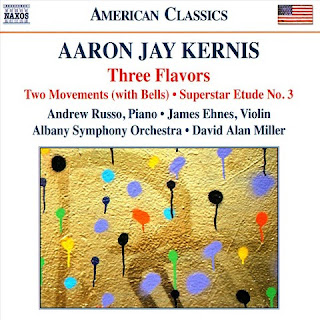 Aaron Jay Kernis and his music until now have dwelt for me in the category of the unknown. He was born in 1960, is very much with us. He won the Pulitzer Prize in 1998. He has written a good deal of music. So today I am finally catching up with him on a disk that showcases three works written in the last several decades. Three Flavors (Naxos 8.559711) gives us a sort of smorgasbord of possibilities, the title work (2002/2013) for piano and orchestra, "Two Movements (with Bells)" (2007) for violin and piano, and "Ballad(e) out of the Blue(s)--Superstar Etude No. 3" (2007) for solo piano.

"Three Flavors" has a modern ring to it, occasionally vaguely Messiaen-esque in influence, well scored, vividly moving along with some jazz influences and lots of dynamic turbulence for both piano and orchestra in the outer movements, advancing the tonal spectrum without abandoning tonality. But there are lyrical moments throughout, especially the middle movement where there is a marvel of a "Lullaby--Barcarole" with some very tender passages.

"Two Movements (with Bells)" is a virtuoso showcase with neo-romantic passion and more very mobile structures-in-motion. The second movement is more reflective and apparently is dedicated to the composer's father. It in its own ways hearkens back to the highly expressive effusions of a time when late romanticism was crossing the threshold into high chromaticism and modernity, but manages to bear the signature imprint of a composer who appropriates and transforms more than imitates. The violin and piano parts are highly idiomatic yet singularly poetic. In the end there is a magically sad expressivity that almost reminds of the beautiful concluding part of Berg's "Violin Concerto," though in its own right and with an immediacy that speaks to us.

"Ballad(e) out of the Blue(s)" concludes the program with an alternately ruminating, then extroverted sort of fantasia for solo piano that combines a rubato blues feel with modern expressive elements. An appealingly difficult-to-play work it is, both evocative and exploratorily modern-soulful. Thus ends the disk.

Performances are quite good. Andrew Russo takes command of the piano parts throughout with a convincing warmth and drive; the Albany Symphony Orchestra under David Alan Miller do good work in realizing the first piece, and violinist James Ehnes drives the middle work with a passionate flight into solo violin singularity.

So there we have it. This is a disk that shows us what the later Aaron Jay Kernis compositional ethos is all about and it is good. The music has a modernity that does not dwell at the edges as much as squarely situates itself in the center, both synthesizing what we have learned and heard in the last 100 years but then taking that and making it original and contemporary. I think this music has the potential to appeal to a wide audience, modernists surely, but then also those who do not seek to be challenged as much as given melodic signposts and skillfully devised music that is both original and somehow familiar in a contemporary comfort zone.

Aaron Jay Kernis is a talent. This is a very nice introduction to his latest music.