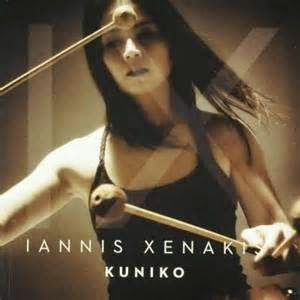 The music of Iannis Xenakis (1922-2001) is like no other. The fact that he used computer algorithms to aid in composition has sometimes led people to misunderstand his centrality in the creative process. He did not simply push a button and out popped the music. The conception and ultimate results were his. Otherwise they would not so consistently embody his signature stylistic universe.

The formidable percussionist Kuniko gives us two major examples of Xenakis's works for percussion on the album entitled IX Kuniko (Linn CDK 492), which is a hybrid CD capable of multi-channel playing as a SACD or standard two-channel playback on a standard CD player. I was unable to audit the multi-channel version because I do not have SACD capability, but the sound in any event is glowing.

The four movement Pleiades (1978) begins the program. It is scored for six percussionists and so Kuniko resorts to multi-tracking to realize the work. Each movement occupies its own sound universe. The specially designed SIXXEN is featured prominently in the second movement. It is a bell-chime like multi-piece percussion instrument that gives out with a special evocative resonance. The other movements have a broad array of instruments both pitched and unpitched. Kuniko's performance is unparalleled, as is the work.

"Rebonds" (1988), a somewhat shorter two-movement work concludes the program. It is designed and played for a solo percussionist using a set ensemble of percussion instruments, mostly "drums" and a set of wood blocks. It is extraordinarily difficult to play and Kuniko most certainly triumphs here. The complexities and sheer aural delight will quicken the pulse of any percussion music adept, but it makes for a wonderful music listening experience in any case.

Some of Xenakis's music demands much of the listener, especially in the days when extreme modernism was not always welcomed by the typical classical listener. Times have gone by and his most difficult works no longer sound nearly as challenging now to our ears. We have all grown in our ability to hear and understand complexities and the new language of modern music. But in any event the percussion works here and their marvelous performances by Kuniko can be readily appreciated, I would think, by anyone who is open to the new. They are not difficult listening, quite the contrary.

Some amazing percussion music can be heard on this one. Bravo Ms. Kuniko. Bravo Xenakis!