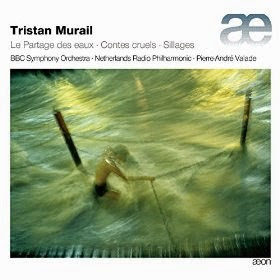 I somehow missed the music of Tristan Murail, even though he taught composition at Columbia, studied with Messiaen, and has had a distinguished career this far. Never too late as the adage goes, since the new CD of his works is exceptional. Le Partage des eaux, Contes cruels, Sillages (aeon 1222) gives us three of his recent works for orchestra. They are notable in their sonic sculptured vibrancy of sound. These are all first recordings.

"Le Partage des eaux" (1995-1996) leads off the program with a large version of the BBC Orchestra, electronics, and compositional results coming out of the spectral analysis of a breaking wave and its backwash that is translated into uncanny sound color, both gestural and very poetic. The music sounds like no other, but extraordinarily musical and modern in the highest sense. The BBC Orchestra gives us a phenomenal sonic palette.

"Contes cruels" (2007) and "Sillages" (1985) are both performed well by the Netherlands Radio Philharmonic. The former is for orchestra and two electric guitars tuned a quarter tone apart in a not quite concerted role but whose parts are integral to the work. Wiek Hijmans and Seth Josel take on the guitar co-solos and give them an avant metal sort of ambiance that fits very well with the dynamic and sonically spectacular orchestral parts.

"Sillages" has yet another atmospheric take on sound color. It continues in the vein of the previous two works without in any way repeating what they have established. It is a musical impression of the Zen rock gardens of Kyoto, with their undulated earthen raking surrounding the rocks. Whether you are aware of this or not does not effect your appreciation of the startling qualities of the music, but in the end it makes a certain sense.

This is orchestral music of such a singular sonic vision that it goes miles forward in what we have come to expect. It is other-worldly. Murail is a brilliant composer-orchestrator and these works positively stand out as extraordinary tone poems for today. It is music that advances the modernist agenda in ways that will enthrall anyone with open ears. Such sounds you have never heard! This music has a structural logic that comes off as anything but random. Conductor Pierre-Andre Valade clearly understands this music and brings out the swells of exotic sounds with care and brio. I cannot recommend this one heartily enough. For modernist fans it is a godsend, but even those with some reticence should be able to revel in this most innovative world. Molto bravo!