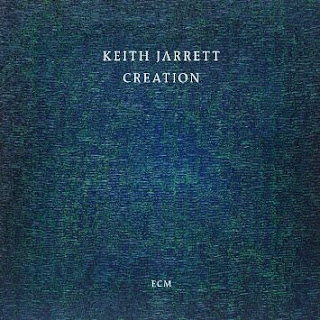 Pianist Keith Jarrett recently turned 70. To celebrate the milestone he has released simultaneously two albums, one a recording of two concertos I will discuss soon, the other an album of solo piano improvisations called Creation (ECM 2450 B0023013-02). I deal today with the latter.

Jarrett, along with Cecil Taylor, has been monumentally influential for his solo improvisations throughout his career. His excursions in this realm have had a wide acceptance with the music-loving public; they have been critically acclaimed; they have given us a dimension of improvising which incorporates both his jazz background and classical elements. The earlier examples had much in the way of spectacular technique. The later period is less concerned with that realm, the playing stripped down to communicate directly with more somber or reflective expressions of a concentrated sort. That is especially true of this one.

Creation, consisting of nine segments drawn from six 2014 concerts, were personally selected by Maestro Jarrett and form a cohesive whole. These are nocturnals, meditative, introspective, balladic, harmonically centered and melodically improvisatory. They seem a natural outcrop of Jarrett's increasing attention to balladic standards but also to a sort of original equivalent to aspects of Chopin or later Liszt, both beautiful and somewhat stark.

If I post this album here on the classical page, it is because these improvisations should be of interest to the classical listener as much as those who come to his music out of his jazz background.

Those who know a good deal of his work in the solo realm over time will know that the later period often enough marks a more reflective Jarrett, less exuberant, less the spectacular virtuoso, less ecstatic, more somber, yet still extraordinarily lyrical.

And yes, this aspect of Jarrett the artist has nearly always been a part of his style, but never before in such concentric terms.

There are extraordinary moments on this one, to be sure. I won't say that there are intimations of mortality in some direct sense, but of course as you get older you lose friends, colleagues (Paul Motion and Charlie Haden in the last few years, for example) and if I detect a eulogistic tone in this music, it may be because I know how loss can color one's life after a certain stage, and the realization that your own life may not last another 100 years. But I do hear a kind of looking back, a feeling of coming through much and a reflection on it.

It is a beautiful album. It is not what earlier Jarrett solo improvs dwelt on at such length, but that is what sets it apart and distinguishes it from them.

There is still inspiration, much of it in these segments. If you approach it with no expectations (as much as that is possible) you will no doubt fall under the spell of the moods and be transported as I have been to a magical realm. This is introspective later Jarrett at its best. He remains brilliant in new, perhaps more subtle ways. Bravo!