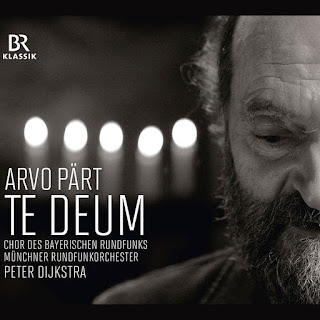 Anybody reading this blog regularly no doubt knows Arvo Part as one of the leading composers of our times. He has had a huge influence on the postmodern scene as a brilliant voice who somehow manages to combine the contemporary with elements of archaicism-early music, especially in his choral works. Te Deum is one of the prime examples. Peter Dykstra, the Chor des Bayerischen Rundfunks and the Munchner Rundfunkorchester have recorded a version recently with appropriate additional pieces (BR Classics 900511) and it is to this we turn today.

Along with a beautiful version of "Te Deum" we also have "Pilgrims' Song," "Berlin Mass," and "After the Victory." The latter is sung a capella; the others are for choir and string orchestra. To be precise, "Te Deum" is for three choirs, prepared piano, string orchestra and tape. The works were written between 1985 and 2001, a peak in the development of his mature style, and mesh together for an impressively unified expression.

The later-day Part thrives through an unusual musical approach that uses rather simple means. Diatonicism is at the heart of much of it, but often also an irregular use of sound and space that owes a little something to the asymmetric text-based forms of plainchant and Orthodox chant.

There is a great deal more that could be said of his stylistic singularity but it is in the hearing that we experience it without question. So I leave that to your ears.

These are all masterful examples and the performances are among the best. Dijkstra pays equal attention to choir and orchestra for a detailed soundscape that has great expressive power, a meditative tenderness as called for, and an aural focus so important to this music.

I cannot say I've heard better versions, though there are recordings that match these performances in their own ways. The concentration on choral works gives this release a compelling consistency that makes it a good one to have. Part completists will want all of them, but for everybody else this one is especially attractive if you can only have so much. Very recommended.