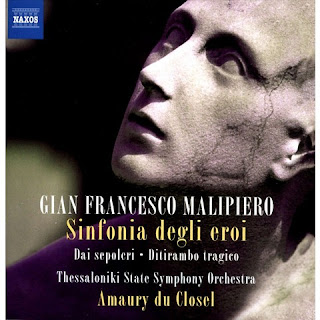 In the Italian rebirth of instrumental music during the last century, Gian Francesco Malipiero (1882-1973) played a central role, yet does not always get the recognition that is his due. Naxos has gone some way to rectify that in a series of releases covering his orchestral output. I've reviewed another of them here, which you can locate via the search box. The final volume of the series is out, devoted to his earlier works, under the title Sinfonia degli eroi (Naxos 8.572766).

On it are featured five works written between 1905 and 1918, four of the five in world premiere recordings. We hear a Malipiero finding his way yet ever contemporary for his era, and showing in the first works a sense of direction not always typical of a composer in his younger years.

The 1918 "Grottesco" is the more advanced of the pieces, showing the influence of Stravinsky without losing the Malipiero identity. "Dal sepoleri (From "Tombs)" (1904) is the earliest of surviving works along with the title piece "Sinfonia degli eroi (Symphony of Heroes)" 1905. Both show a sort of symphonic poem approach with descriptive orchestral writing that has hints of impressionism and a kind of post-romanticism or a brink-of-change late romantic dynamic. The "Sinfonia" has thematic memorability.

The "Ditirambo tragico" (1917) and "Armenia" (1917) share with "Grottesco" a further evolved Malipiero. "Armenia" captures traditional melodies of the region in a charming manner, with a sense of symphonic color that shows Malipiero's increasing orchestrational mastery. "Ditirambo tragico" has a brooding quality in keeping with its subject matter and at times a dark sprightliness with a modern harmonic flourish that still sounds fresh.

The performances are respectable and serve to introduce the music to us properly if not exactly spectacularly.

So there we have it. The thematic elements of heroism and death tie the works together. It may not be essential listening compared to some of the earlier volumes, but they all show Malipiero in his formative period and so serve to flesh out a complete picture of the artist. None of the music is ephemeral or inconsequential. So for the Malipiero student there are revealing things to hear. It is a good listen in any event.